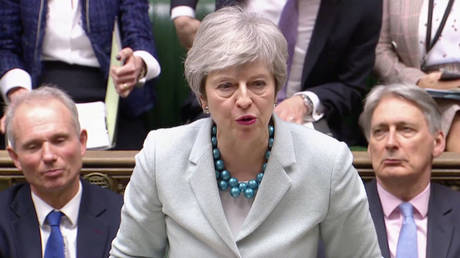 Prime Minister Theresa May delivers her Brexit update statement in the House of Commons, following an EU summit with the bloc’s 27 leaders, admitting that her current deal cannot command the support of UK MPs.

With pressure being cranked up on May to the point of serious questions being asked about whether she can see the week out as PM, Parliament must come up with a Brexit deal that can garner the support of a majority of MPs. If not, the UK could potentially crash out of the EU on April 12 without a deal.

Addressing MPs, May told the House that she concedes, at present, there is no chance of her deal getting through on a third “meaningful vote.”

As things stand there is still not sufficient support in the house to bring back the deal for a third meaningful vote.

Earlier, May’s task of pushing through her own, twice defeated deal in a third attempt became nothing more than impossible, after various media report that the DUP are still not backing her agreement.

Cabinet finishes and there are reports Theresa May is thinking of having Meaningful Vote 3 tomorrow.

Minutes later DUP sources say they won’t be backing the PM if she does.

Pretty much killed that plan instantly….

Earlier Labour leader Jeremy Corbyn met with the prime minister for face-to-face Brexit talks. A Labour spokesperson released a statement shortly after their discussions claiming that May had suggested separating the Withdrawal Agreement from the political declaration, which Corbyn refused to accept.

The European Commission has released a statement suggesting that it looked increasingly likely that the UK will leave the EU without a deal on April 12, adding that they had completed its ‘no-deal’ preparations.