The Popular Resistance School will begin on May 1 and will be an eight-week course on how movements grow, build power and succeed as well as examine the role you can play in the movement. Sign up to be part of this school so you can participate in small group discussions about how to build a powerful, transformational movement. REGISTRATION CLOSES MIDNIGHT APRIL 30.

Seventy years of attacks on the right to unionize have left the union movement representing only 10 percent of workers. The investor class has concentrated its power and uses its power in an abusive way, not only against unions but also to create economic insecurity for workers.

At the same time, workers, both union and nonunion, are mobilizing more aggressively and protesting a wide range of economic, racial and environmental issues.

On this May Day, we reflect on the history of worker power and present lessons from our past to build power for the future. 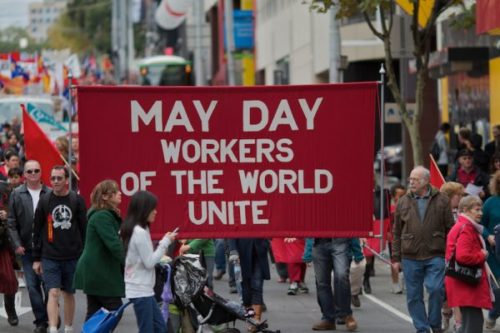 May Day Workers of the World Unite, Melbourne, Australia, in 2012. By Johan Fantenberg, Flickr.

In most of the world, May Day is a day for workers to unite, but May Day is not recognized in the United States even though it originated here. On May 1, 1886, more than 300,000 workers in 13,000 businesses across the US walked off their jobs for the first May Day in history. It began in 1884, when the Federation of Organized Trades and Labor Unions proclaimed at their convention that workers themselves would institute the 8-hour day on May 1, 1886….