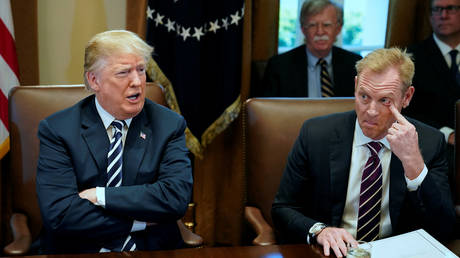 Not willing to wait for the resigning US defense chief James Mattis to finish his term, President Donald Trump has announced that his deputy Patrick Shanahan will serve as acting defense secretary from January 1.

I am pleased to announce that our very talented Deputy Secretary of Defense, Patrick Shanahan, will assume the title of Acting Secretary of Defense starting January 1, 2019. Patrick has a long list of accomplishments while serving as Deputy, & previously Boeing. He will be great!

Mattis resigned from Trump’s administration this week citing policy differences and offered to stay in his post for two more months until the end of February. While Trump himself had confirmed the time frame, he has now made it clear Mattis will be out of the team quite a bit earlier.

Reports and speculation emerged that the abrupt change was caused by Mattis’ resignation letter and the attention it received. Trump was irked by the letter, which implicitly criticized his policies and the decision to withdraw from Syria, and decided to oust the Secretary of Defense immediately, Reuters reported, citing a source.

Shortly after the announcement, Trump revealed that he held telephone talks with his Turkish counterpart, Recep Tayyip Erdogan, in which the two discussed “mutual involvement in Syria” and the “slow and highly coordinated pullout of US troops from the area.”

Mattis’ resignation may signal further changes in US foreign policy, as he was one of the last “old school” officials sticking to “alliances and stability” to maintain the “US-led world order,” former Pentagon official Michael Maloof believes.


“Trump has come around and blown that all up. He looks at America first, while paying lip service to alliances such as NATO, but in reality he wants a strong America. Mattis did too, but in coordination with allies,” Maloof told RT, adding that such a stance on Trump’s part actually speeds up the emergence of a multipolar world, which ultimately further damages “US hegemony.”

The departure of Mattis certainly won’t help Trump garner support among the military, Maloof believes, saying that it might even damage the morale of US troops.

“He had a tremendous respect among the troops. I knew General Mattis – partially – and the respect that he engendered from the rank and file military was almost as though he was another General Patton,” he said. “I don’t think the military is going to be supportive of Donald Trump as a consequence.”