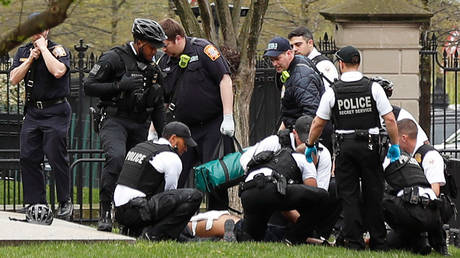 A man has apparently attempted to set himself on fire outside the White House. He caused a commotion by lighting his jacket on fire before Secret Service agents stepped in and whisked him away. He is being treated for injuries.

The man rode up to the presidential residence on a motorized wheelchair before his apparent attempt at self-immolation, said reporter Christal Hayes of USA Today.

As the Secret Service apprehended the man, the White House was placed on lockdown and reporters ushered inside.

Lots of commotion outside the White House after a man reportedly set himself on fire @USATODAY
Witnesses here say the man was in a motorized wheelchair and set his jacket on fire. Authorities rushed in and used an extinguisher to put it out pic.twitter.com/7H6H1CS5zc

Lockdown at the White House after someone reportedly set himself on fire outside the WH gates. Media now being told to go back inside. pic.twitter.com/brWPY6sQ6Q

The incident took place around 3 pm local time on Friday.

The Washington, DC Fire Department is reportedly treating the man for minor injuries.

NBC reported that a “suspicious package” was found near the man. The object was most likely his backpack, a witness told Hayes.