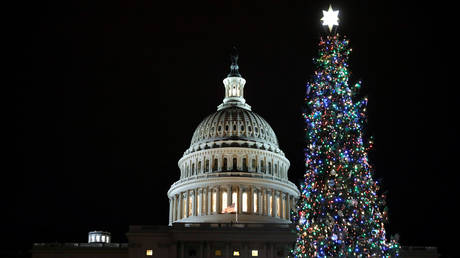 As the government in Washington heads for a funding shutdown, a man climbed the National Christmas Tree outside the White House, causing a more literal kind of shutdown. Police had to close the area off and talk him down.

Around the time that the vice president broke a tie in a Senate vote on the spending bill that provides funding for Donald Trump’s border wall, an unidentified man set out climbing the National Christmas Tree just outside the White House.

Police rushed to the scene, closed off the adjacent area, and dispatched a negotiator to bring the daredevil back down.

Video from the scene showed a huge police presence near the public attraction.

The man sat in the tree for about an hour before finally climbing down. Police said he “self-extricated” from the tree without needing any assistance.

The man did not suffer any injuries, which cannot be said for the tree, with NBC4 reporting that some of its lights were damaged.

National Park Service Sgt. Eduardo Delgado said that the man appeared to be experiencing “emotional distress” and was sent to hospital for a psychiatric evaluation.

The man’s motives are unknown, though some jokingly suggested that he was protesting against the border wall legislation.

Another witty Twitter user remarked that, with all the pre-Christmas madness in Washington, climbing the iconic tree is “the least weirdest thing.”

And yet, a guy climbing the Christmas tree is the *least* weirdest thing in Washington, DC.

Meanwhile, police said that access to the tree would be prevented for the entire night.