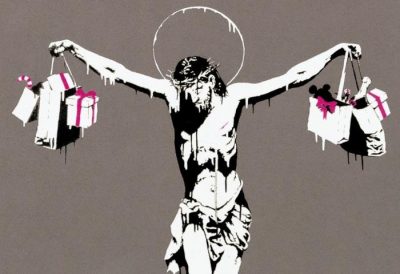 The holiday period provides us with a unique opportunity to express the new awareness that must inform a less commercialised and more sharing-oriented world. Rather than spending all our time partaking in conspicuous consumption, why don’t we commemorate Christmas by organising massive gatherings for helping the poor and healing the environment?

At this time of year, our overconsuming lifestyles in the affluent Western world are impossible to ignore. Brightly-lit shops are bursting with festive foods and expensive indulgences, while seasonal songs play in the background of shopping malls to keep us spending the money we don’t have on things we don’t need to make impressions that don’t matter.

The frenetic commercialism of Christmas on the high streets continues to escalate to inconceivable proportions. Despite all the warnings from climate scientists that ordinary Western lifestyles are destroying the planet, still we buy enough Christmas trees in the UK alone that could reach New York and back, if placed in a straight line. Enough card packaging is thrown away in this country that could cover Big Ben almost 260,000 times. Not to mention the 4,500 tonnes of tin foil, the 2 million turkeys, the 74 million mince pies and 5 million mounds of charred raisins (from rejected Christmas puddings) that are thrown away come early January. Mountains of e-waste from discarded electronic items –…