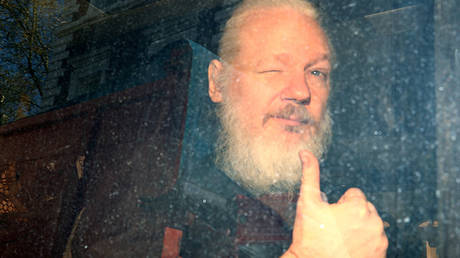 A group of veteran intelligence professionals have warned that the Mueller report contains no proof to back up claims of ‘Russian hacking’ and said WikiLeaks co-founder Julian Assange might shed some light on it.

Special counsel Robert Mueller’s report, made public on Thursday by the US Department of Justice, says no Americans – including Trump and his campaign staff – actually “colluded” or coordinated with Russia, but does claim that Moscow “interfered” in the 2016 US presidential election. This was done, the report asserts, through a social media influence campaign and hacking into Democrats’ computers to obtain documents later published by WikiLeaks and others.


Even before the report’s publication, in an open letter to President Donald Trump on Tuesday, Veteran Intelligence Professionals for Sanity (VIPS) called it out for this “central-but-unproven allegation,” lambasting the special counsel for not doing any forensic work and accepting the word of “a discredited, DNC-hired firm named CrowdStrike, whose credibility is on a par with ‘pee-tape dossier’ compiler Christopher Steele.”

The group said that they brought up this lack of independent forensic research in a memo sent to Attorney General William Barr on March 13, but “received no reply or acknowledgment.”


VIPS has long been vocal about the CrowdStrike-shaped hole in Russiagate’s central premise; back in July 2017, they published their own research that indicated the DNC files must have been copied locally. Several months later, VIPS member William Binney – a renowned NSA whistleblower – even met with Mike Pompeo, then director of the CIA, and presented the group’s case to him.

Pompeo told Binney he would follow up on his revelations with the CIA, FBI and NSA, but “We have no sign, though, that he followed through,” VIPS said in Tuesday’s letter.

Also on rt.com
‘I could’ve fired EVERYONE, including Mueller!’ Trump explains what real obstruction would look like


One person who could offer clarity on the issue is WikiLeaks founder Julian Assange, who, VIPS says, was “reportedly very close” to an agreement with the US government in March 2017 to discuss “technical evidence ruling out certain parties” in the DNC case. However, then-FBI Director James Comey reportedly ordered the FBI to scrap the deal, after being informed of it by Senator Mark Warner (D-Virginia), ranking member of the Senate Intelligence Committee.