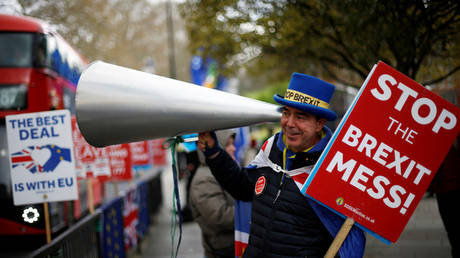 Worried Brits took to Twitter on Wednesday to express disgust at raucous scenes in the House of Commons as”out-of-touch”MPs seemed to be laughing their way through the Brexit drama, during a day of indicative votes.

TV personality Piers Morgan was among those who noted that parliament was “rocking with laughter” as lawmakers “drag Britain ever deeper into a sewer of chaos & global ridicule.”

The House of Commons often erupts into bouts of raucous laughter as politicians mock and insult each other, but people are finding it all a little less funny given the seriousness of what is at stake when it comes to Brexit.

Parliament rocking with laughter today – what fun our MPs are all having as they drag Britain ever deeper into a sewer of chaos & global ridicule. Shameful.

MPs are grinning and joking “while the citizens of this country are denied democracy,” one angry Twitter user said. The laughter “shows how out of touch they are,” another said, while regular people are struggling “to keep afloat financially, feed and clothe their kids.”

I said exactly the same to my wife yesterday ! Lots of mirth , and grins, while the citizens of this country are denied democracy . I’m so glad they think it’s hilarious . We do not !!!!!!

It just shows how out of touch they are. A large percentage of the UK population are trying to keep afloat financially, feed and clothe their kids while working for a pittance thanks to Universal Credit. What are the MPs doing? Acting like overgrown kids in the school playground

“Let them laugh,” one tweeter said, because they will all be “out of a job” after the next election.

“Am sickened that MPs are laughing & joking in Westminster,” at such a “serious time,” said another.

Am sickened that MPs are laughing & joking in Westminster at #PMQs at this most serious time. The laughter is only eclipsed by the wilful lies being spouted by @theresa_may. The country weeps at the shocking betrayal of democracy. Shame on you all.

One slammed the “liars and bullies” laughing and cheering while ordinary people sit at home and watch the chaos play out.

Watching PMQs and hate watching these liars and bullies laughing and cheering while we sit at home depressed at being conned by a bunch of two faced low calibre MPs who have now all turned their backs on us. CON OF THE CENTURY !!

“Laughing and joking while the country burns.”

Just watching the House of Commons, what a rabble, laughing and joking whilst the Country burns!

Look like they’re “all on a jolly boys outing!”

Its actually sickening watching the commons, the speaker laughing and joking like they’re all on a jolly boys outing! We are up shit creak without a paddle 😡

Wednesday was the third day of parliamentarians taking control of the House of Commons, during which they passed Labour MP Yvette Cooper’s bill on extending Article 50 and avoiding a no-deal Brexit. Prime Minister Theresa May has already announced she will pursue the Article which extends Britain’s exit from the EU, but Cooper’s bill seeks to allow MPs a say over just how long that delay is.


One of the outbursts of laughter came about as Hilary Benn’s motion for another MP take-over day next Monday resulted in a rare Commons tie – 310 Ayes to 310 Noes. Speaker John Bercow cast the deciding vote to defeat the motion, siding with the government and saying it was his responsibility not to create a majority “that isn’t there”.

The result means British MPs will not have control of their parliament on Monday. The politicians voted on March 25 to seize control of Westminster from Prime Minister Theresa May, to hold a series of indicative votes.