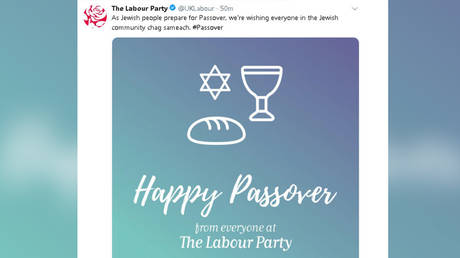 Amid an ongoing anti-Semitism row that has plagued the party for months, Labour’s well-intentioned (now-deleted) Passover tweet contained a galling error that did not escape eagle-eyed Twitter users.

“As Jewish people prepare for Passover, we’re wishing everyone in the Jewish community chag sameach. #Passover,” Labour tweeted. Harmless enough, right? Sadly, one critical detail in the accompanying image in the tweet is what did the damage.

The image contained a loaf of bread alongside a Star of David and a cup. The entire festival of passover is specifically entered around not eating bread, however, as legions of irate commenters tweeted at the Labour Party.

This is a loaf of bread. Passover is about NOT eating bread, this just shows your complete lack of knowledge of our community. Utterly disgraceful.

Re that Labour bread thing.. I am genuinely sitting at my desk smiling to myself… it’s almost tragic how incompetent that error is. Like… you had one job

Next up, Labour Lunch to celebrate Ramadan.

Labour has been dogged by accusations that is has acted too slowly in investigating claims of anti-Semitism in its ranks.

In February, a group of Labour MP’s announced they were quitting the party over both its handling of Brexit and what they saw as an “institutionally anti-Semitic” leadership.

It became such a toxic issue for the party that it even led to veteran Labour MP Margaret Hodge allegedly calling Corbyn an “anti-Semite” in the House of Commons.