An interview with K.J. Noh

By many accounts, the Koreans – North and South – have prevailed over the disruptive desires of the United States, coming together in a series of very public actions, clearly meant to turn down the political heat generated by President Donald Trump and the U.S. pressure for military action. This pressure can be seen as a continuation of President Barack Obama’s “Asia Pivot,” a policy that called for full U.S. dominance in the region, including by containing China and the new emerging regional powers through a set of expansive, coordinated, and aggressive military alliances with Japan and other Pacific Rim countries. 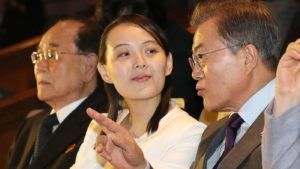 The high-profile actions taken by the North and the South – both acting independently of Washington – left U.S. Vice President Mike Pence pouting and twiddling his thumbs on the sidelines during some very effective international diplomacy. In this regard, there does indeed seem to be a new and genuine desire on the part of the president of South Korea to forge a more peaceful and cooperative relationship with the North, even though U.S. officials and commentators seem to be dead set against it, portraying the warming relations…