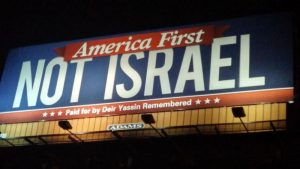 Remember the days of poking fun at Pravda, the Russian government-owned press? We asked: how could anyone rely on the truthfulness of reports that were filtered by agenda-driven government agents? Aren’t we Americans lucky to live in a land where our news isn’t filtered, where we — unlike our Russian counterparts — enjoy a “free” press?

We have witnessed how Jewish Power persuaded at least a half dozen billboard companies to refuse our attempts to run billboards with the simple message:

Pressing on, WfP initiated contact with the local MLive Media Group, publisher of a resurrected Ann Arbor News, to run a display ad with the text:

After MLive received the desired text, and after we received the print ad specs and discount page, marketing executive Hannah Gellis then inquired: “Thanks, Henry. After looking at the discount sheet, how many ads are you interested in running? ”

We responded “We are looking at placing six ads, two per month if the marketing program allows. Sunday editions Eighth-page ads (6 @ $240/ad = $1440). We would then be looking at two ads in December, two in…