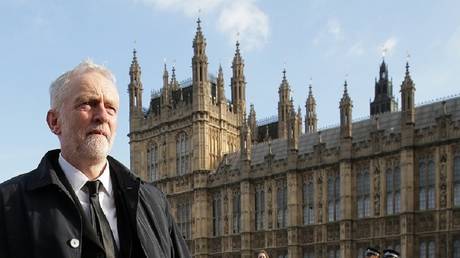 There is a “huge” risk the Palace of Westminster could fall victim to a similarly catastrophic fire that ravaged France’s Notre-Dame Cathedral on Monday night, Labour leader Jeremy Corbyn has claimed.

Speaking in the aftermath of the tragic events in Paris which saw the cathedral’s roof, spire and clock destroyed, Corbyn insisted it should serve as a stark warning for the future of Britain’s “Mother of Parliaments.”

The state of the building is very poor in Westminster and a fire risk is obviously huge with a building that has so much wood within it.

British lawmakers have long acknowledged that action is required to safeguard the Palace of Westminster, but have spent several years arguing over the best way to proceed. MPs have also recoiled at the news of £3.5 billion being needed to renovate the building.


Defence Secretary Gavin Williamson claimed that ploughing huge amounts of money into the iconic building is of paramount importance so that it isn’t “vulnerable to fire.”

The implementation of the “restoration and renewal” programme for the Houses of Parliament, originally built in the 11th century, is not scheduled to start until mid-2020s. The building is made from limestone, but fears have been raised by a number of MPs over the electrical, plumbing, heating and sewerage systems contained within the structure.

Parliamentarians voted in early 2018 to vacate the historic building to allow work to be carried out.