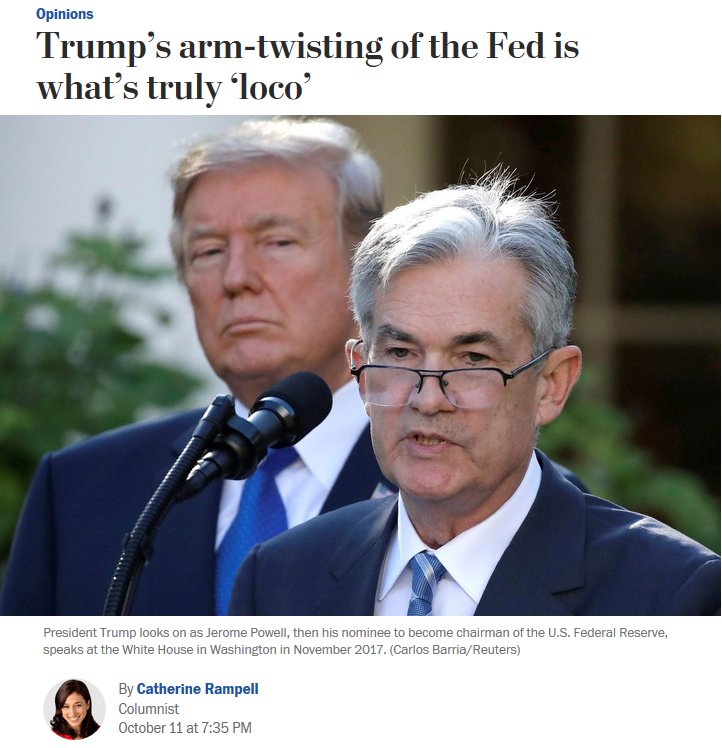 For the Washington Post‘s Catherine Rampell (10/11/18), the Federal Reserve’s “political independence is supposed to be sacrosanct”–but not independent of bankers, of course, who by law control 42 percent of the votes on monetary policy.

There is a popular line in elite DC circles that political figures are not supposed to talk about the Federal Reserve Board’s monetary policy. This was the theme of Catherine Rampell’s latest Washington Post column (10/11/18). The piece complained about Donald Trump’s criticisms of the Fed’s interest rate hikes and said that countries where monetary policy is controlled by politicians end up with hyperinflation.

While there is a list of countries where political control of the central bank has led to hyperinflation, there are also many examples of countries where political control did not lead to hyperinflation, starting with the United Kingdom. The Bank of England had been under the control of the finance minister until Tony Blair “set it free” in May 1997. The United Kingdom did not have any bouts of hyperinflation that I can recall.

The law gives the Fed a large degree of independence. Its seven governors are appointed by the president and approved by Congress. They serve 14-year terms, which means they don’t have to worry about losing their jobs if they anger a politician. There are also 12 presidents of the regional Feds who sit on the Fed’s Open Market Committee that determines monetary policy. (Only five have votes at any point in time.) These bank presidents largely owe their job to the banks in the region.

In this context, it is perfectly reasonable for politicians to criticize the conduct of monetary policy. We can view the Fed as being like the Food and Drug Administration. While we would not want members of Congress or the president deciding which drugs get approved, it would be very reasonable for them to complain if, for example, the FDA went three years without approving any drugs, or alternatively was rapidly approving drugs that were causing people to die. Similarly, political figures have every right in the world to complain if the Fed is being overly concerned about inflation at the cost of slower growth and higher unemployment.

It is questionable whether Trump has adopted the most effective route in pressing this sort of criticism. Rather than saying he does not like the policy that the Fed chair he picked is following, it might have been more useful to have his Council of Economic Advisers produce evidence that the economy does not face a serious risk of inflation right now.

He might also choose to withdraw the nomination of Marvin Goodfriend for one of the open governor positions. Goodfriend has long been an inflation hawk who has argued for higher interest rates for many years. If Trump really doesn’t want the Fed to raise interest rates, it doesn’t make sense to appoint someone to the Board of Governors who is very committed to raising rates.