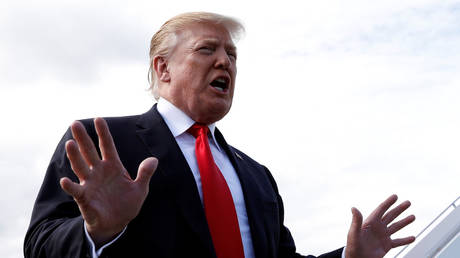 President Trump has greeted Special Counsel Robert Mueller’s report – which found no evidence of collusion between the Trump campaign and Russia in 2016 – enthusiastically, calling it a “Complete and Total EXONERATION.”

Special Counsel Robert Mueller submitted his report to Attorney General William Barr on Friday, after almost two years of investigation. Barr released a summary of the report on Sunday, explaining that Mueller found no evidence of ‘Russian collusion,’ and insufficient evidence of obstruction of justice.

“This was an illegal takedown that failed,” he continued.

Also on rt.com
Mueller probe did not find that Trump campaign conspired with Russia


Trump had repeatedly criticized Mueller’s probe, calling it a politically-motivated “witch hunt,” and an “illegal and conflated investigation in search of a crime.” Trump had also called Mueller “out of control” and referred to his legal team as a “band of angry Democrats.”

With Mueller’s report finished, Trump’s opponents have shifted to pressuring Barr to release its underlying evidence. Senate Minority Leader Chuck Schumer said that this evidence “may be even more important to the truth than the report itself.”

Among Trump’s most ardent opponents, the report has seemingly done little to sate their desire to go after the President. California Rep. Adam Schiff (D), currently heading a House Intelligence Committee investigation into alleged ‘Russian collusion,’ tld ABC News on Sunday that he believes he believes “compelling” and “significant evidence of collusion” still exists.