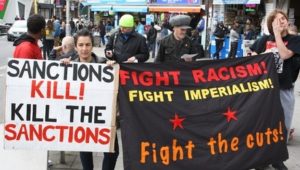 The examples of US government chicanery are myriad. In 1972, American president Richard Nixon and his Soviet counterpart Leonid Brezhnev agreed on an Anti-Ballistic Missile treaty that limited strategic defense systems. In December 2001, president George W Bush gave notice of US intent to withdraw from the ABM treaty. When Nixon signed, the USSR was a military superpower. Russia was still economically crippled, recovering from the collapse of the USSR and communism, when Bush opted out. The result was, according to Russia, the development of sophisticated next-gen hypersonic and nuclear weapons.

In 1994, US ambassador Robert Gallucci and the Democratic People’s Republic of Korea vice-minister Kang Sok-ju signed the Framework Agreement. That agreement stipulated that the DPRK cease operation and construction of nuclear reactors that were part of a covert nuclear weapons program. In exchange the US would construct two proliferation-resistant nuclear power reactors for the DPRK and supply it with heavy fuel oil pending completion of the reactors. In January 2002, Bush calls the DPRK a part of the “axis of evil.” In April 2002, Bush stated he would not certify the DPRK’s compliance with the Agreed Framework. In November 2002, the US announces a halt to fuel shipments to the DPRK. In…