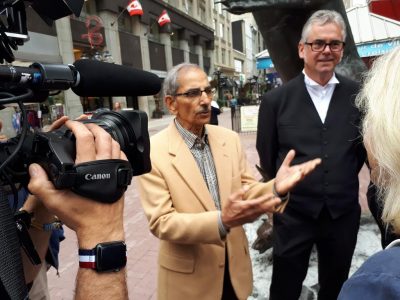 Growing up in India during the war, Shiv Chopra was shaped by two of Mahatma Gandhi’s guiding principles: “Civil disobedience becomes a sacred duty when the state becomes lawless or corrupt,” and “the first step in fighting injustice is to make it visible.”

On January 7, the former Health Canada scientist and whistle-blower who believed “we should take food out of the economic equation” quietly succumbed to cancer in a Kanata hospice, surrounded by family. Online tributes continue to pour in from all over the world in response to the loss of Chopra’s courageous voice from the front lines of food safety activism.

A microbiologist and drug safety regulator with the Bureau of Veterinary Drugs for 35 years, Chopra is best remembered for leading the resistance to government and bio-tech industry pressure including agro-chemical giant Monsanto to approve bovine growth hormone (rBGH) and other veterinary drugs of questionable human safety. Monsanto insisted on Health Canada’s approval after the U.S. Food and Drug Administration rubber-stamped the drugs for licensing.

But Chopra and fellow scientists Margaret Haydon and Gérard Lambert refused, pointing to gaps in Monsanto’s human safety data. The in-house controversy hit the fan at parliamentary committee hearings in 1998, where Chopra delivered unflinching – many say heroic – testimony that blew the lid off government and industry complicity in Health Canada’s controversial drug approval…