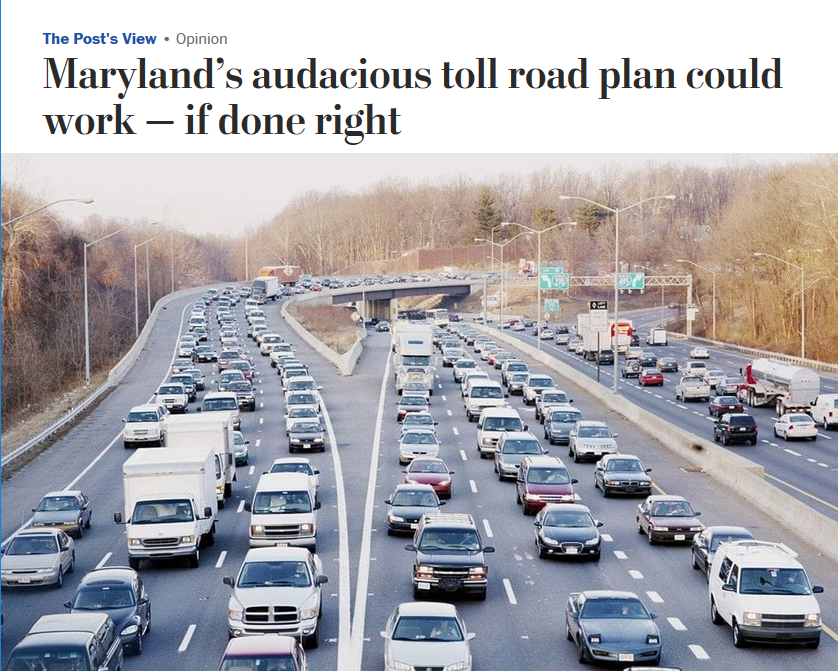 The Washington Post (12/8/18) argues that “Mr. Hogan’s plan…makes sense,” given that “car usage nationally is expanding at roughly twice the rate of population growth.”

As world leaders gathered in Poland for the UN climate conference, the Washington Post threw its support behind a $9 billion plan to add over 100 miles of toll lanes to Maryland highways in the traffic-choked DC region. The Post offered its hearty initial support, despite the fact that studies show adding more lanes leads to more cars on the road, when cars already consume “a quarter of the world’s oil” (New York Times, 12/13/18).

At the climate conference—which came on the heels of a major UN report finding that the world has just 12 years to drastically cut emissions to avert catastrophe—there was a sense of urgency. “To waste this opportunity in [Poland] would compromise our last best chance to stop runaway climate change,” said UN Secretary General Antonio Guterres. “It would not only be immoral, it will be suicidal.”

Meanwhile, at the Post—which seemed to be channeling President Trump’s drill, baby, drill approach to the environment—there was excitement over Republican Maryland Gov. Larry Hogan’s highway expansion plan, which the newspaper (12/8/18) hailed as “potentially one of the most audacious public/private partnerships in the nation.”

Marylanders, however, are far less enthused (Post, 10/12/18). And with good reason: A joint study by US PIRG and Frontier Group found Hogan’s plan to be one of the country’s top “boondoggles.” The public interest groups noted that rather than easing congestion, adding lanes just encourages more drivers to use the roads. Traffic quickly rebounds to the level it was at before the expansion, while pollution increases and the public purse is drained. 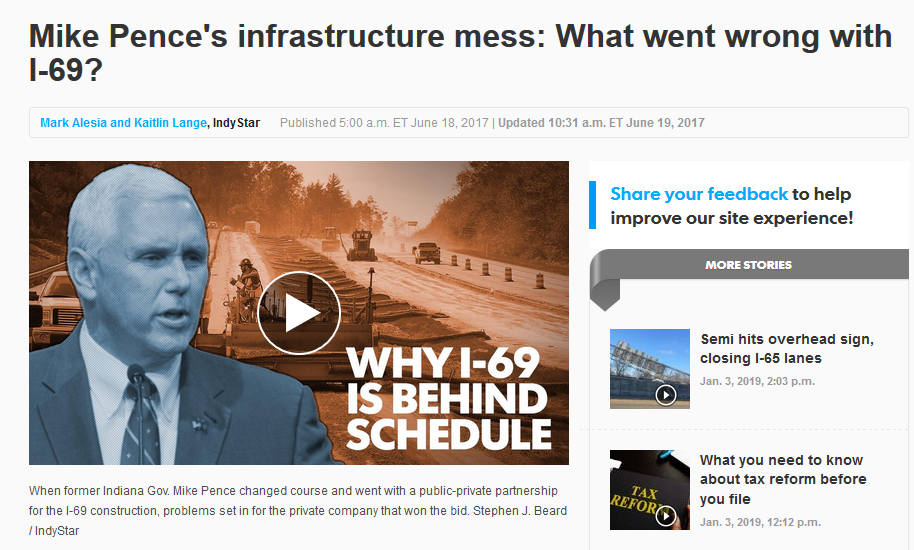 “At first, it sounded like a good idea,” the Indianapolis Star (6/18/17) reported of Indiana’s public/private highway project.

In order to avoid the perception that expanding highways costs the public money, Hogan is turning to private interests to finance and operate the toll lanes in exchange for future toll revenue. These so-called public/private partnerships (P3s) are attractive to lawmakers because they require little to no upfront public money. (“It won’t cost us tax dollars,” Hogan claimed—as though tolls aren’t also money spent by the public.) But things can get messy down the road.

In Virginia, which the Post (12/8/18) holds up as a P3 model, there have been challenges as well. Express lanes on the Beltway—nicknamed “Lexus lanes” for their high tolls—have operated at a financial loss, even as the Australian company financing and operating them remains highly profitable (Post, 10/12/18).

A unique feature of P3s is that their complexity offers investors a variety of ways to maintain profitability, even at a cost to the public, Jeremy Mohler of In the Public Interest explained in a Post op-ed (10/12/18). For instance, if too many vehicles on the Virginia Beltway are carpools, which aren’t charged tolls, the state is penalized.

In addition to Mohler, further criticism of Hogan’s plan has appeared in the Post. The paper (6/26/18) reported on the study that called the plan a boondoggle, as well as the project’s troubled start.

The initial $68.5 million proposal to oversee Hogan’s mega-project was “caught in scandal,” the Post (6/30/18) reported. The governor killed the initial proposal after revelations that the state’s unusual contracting process resulted in two out of the three primary contractors having ties to Hogan’s transportation secretary (Post, 4/20/18). (The secretary cited the rush to lure Amazon’s second headquarters to Maryland as a reason for the questionable procurement. In its unsuccessful bid to lure Amazon—whose CEO, Jeff Bezos, owns the Post—Maryland offered a whopping $8.5 billion in public goodies.)

The Post reported on the troubling start to Hogan’s plan at the time, but since then it’s been largely forgotten, as has the study which showed the highway expansion to be a boondoggle. What’s more, the Post (12/8/18) waited until after Hogan’s reelection to inform readers that his highway expansion is likely to require taking people’s private property, possibly “razing businesses, houses and apartments.”

Meanwhile, the Post only gives the faintest of nods to climate change, even as Hogan puts the issue front and center—as a justification for highway expansion. “The science is clear,” Hogan lectured Josh Tulkin, director of the Sierra Club’s Maryland chapter, at a Board of Public Works meeting, “people’s traveling at greater speeds do produce lower carbon emissions. Challenging that is like being a climate change denier.” (You may be unsurprised to learn that increasing highway capacity is not an effective way to reduce carbon emissions.) Asked by the governor whether he was “pro-traffic,” Tulkin explained that adding more lanes induces more demand, an argument Hogan found unpersuasive.

But the science is clear: Heading off climate disaster necessitates rapid changes, including getting cars off the road. Meanwhile, the Post is advocating for the opposite—suicidal—approach. The newspaper’s message seems to be, Let the good times roll, at least for those in the Lexus lanes.