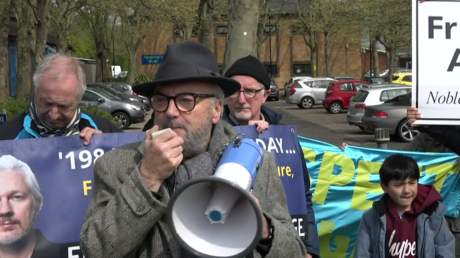 The public must raise its voice for Julian Assange if it does not want to be gagged for good, says George Galloway, who believes that the publisher’s persecution is an assault on the fundamental right of people to know the truth.

Galloway and a crowd of WikiLeaks supporters staged a protest in support of the arrested co-founder of the whistleblowing site on Sunday outside Belmarsh Prison, where Assange is being held, a top security jail in southeast London known as ‘Britain’s Guantanamo Bay’.

Assange was dragged out of Ecuador’s London embassy on Thursday after spending almost seven years in de-facto confinement, with his visitor rights limited and internet cut off during the last months of his exile.

Galloway, a film-maker, writer and former Labour MP, who calls himself a friend of Assange, said that his case affects all who cherish their right to know the truth about shady government dealings.

“You don’t have to like him, you don’t have to like everything he’s ever written or published, but if you like the fact that we have the right to speak and know the uncomfortable truths our rulers don’t want us to know, then you should be here in person, or, at least, in spirit,” Galloway said.

He said this is exactly the type of situation in which one must take sides, and either stand with the “executioners” or oppose them.

“If Julian Assange is criminalized and incarcerated for revealing the truth about what our rulers are doing, have done, then you might as well deliver yourself behind those walls, you might as well volunteer for a prison cell yourself, because you’ll no longer be free, and you’ll never be free again,” the former lawmaker said.

Assange was arrested for skipping bail in the UK and is facing a US extradition request. The US charged him with conspiracy to hack into a Pentagon computer network together with former US Army soldier Chelsea Manning.


While the UK police had the formal right to arrest Assange because of his bail violation, Galloway thinks they should not have treated him like a dangerous criminal.

“The British police had to arrest Julian Assange and they had to put him in an ambulance, not in a police wagon because the man, after seven years in a single room in the Ecuadorian embassy, is obviously not a well man.”

Speaking on the prospects of the US extradition request, Galloway told RT he hopes the British court rejects it. He argued that his trial in the US might go against the principle of double jeopardy since Manning already served time for the same offense.

“There may have been a theft of information involved,” but it was justified, Galloway believes: it was “a right of all the people of the world to know about what Chelsea Manning released.” And while publishing stolen materials in the public interest is nothing new, Assange’s case threatens to put a full stop to it.

“If every publisher who publishes material that was stolen from its owners was put on trial and extradited and sent behind bars, there would be no publishing.”