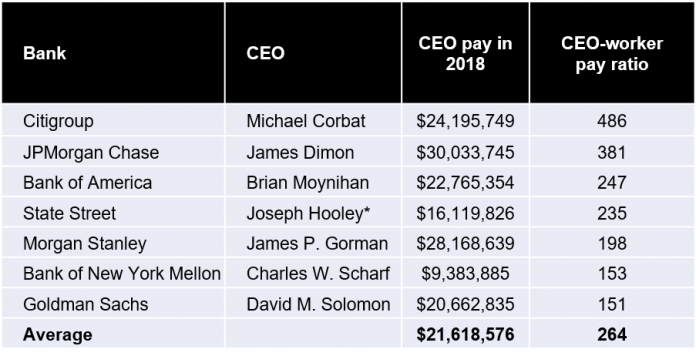 For the first time in a decade, CEOs of America’s mega-banks were summoned to Capitol Hill on April 10 to face scrutiny from lawmakers. House Financial Services Committee Chair Maxine Waters (D-Calif.) explained that her goal was to find out what — if anything — the seven Wall Street leaders had learned since the 2008 financial crisis.

The executives’ own paychecks featured prominently in the questioning — for good reason. The financial industry’s out-of-control pay practices were a key factor in the reckless behavior that led to the crash. Having massive jackpots sitting on the table, with little or no downside risk, gave bank executives a powerful incentive to make outrageous gambles that put us all in danger.

A decade later, the big rewards for bad behavior continue. Waters pointed out that the big banks have had to fork out at least $163.7 billion in fines over the past decade for consumer abuses and other violations of the law. Meanwhile, Wall Street CEOs continue to perch near the top of compensation rankings.

Stay in the loop

Never miss the news and analysis you care about. In a fearless grilling of the Wall Street heavyweight, first-term California Democrat Katie Porter, a former consumer protection attorney, skewered Dimon for pocketing such a massive sum while paying his entry-level employees poverty wages. Using the example of one of her constituents, a single mom earning $16.50 an hour as a JPMorgan Chase teller, she pressed Dimon for solutions to the woman’s household budget shortfall.

“I don’t know, I’d have to think about that,” Dimon admitted.