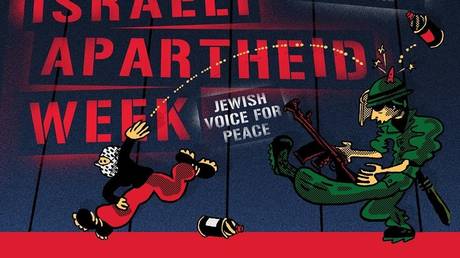 Some questions have no right answer. Blue dress or white? Yanny or Laurel? Is an oddity on an Israeli soldier’s helmet a horn from medieval anti-Semitic propaganda, or a cartoonish bump left by a spray can? Take your pick.

Columbia University’s Students for Justice in Palestine (SJP) chapter is currently holding an annual event called “Israeli Apartheid Week.” As the name implies, it is critical of Israeli policies and is meant to support the rights of the Palestinian people.

However, according to a group rooting for the other team called Students Supporting Israel (SSI) at Columbia University, the event was marred by a “cheap act of portraying Jewish soldiers with physical deformities” that is “downright abhorrent and anti-Semitic and must be condemned by Columbia University.”

This referred to a picture that was made to promote the event, showing an armed Israeli soldier pursuing a masked street artist, who throws spray-paint cans back at him as he runs away.

The ‘deformity’ in question is that… thing on his head. Which, according to SSI, is a horn and comes “from the dark ages of medieval Europe when anti-Semitic propaganda depicted Jews as satanic consorts and an incarnation of absolute evil.”

Anger spread on social media like a firestorm, especially after some Israeli media spotted the story.

Of course, others disagreed with this point of view and considered the thing to be nothing more than a cartoonish bump left by the can. Some shared visual aids to make their point.

‘Camp horn’ came up with theirs.

There have been plenty of attempts to find rational arguments to make the case for both sides.

But there’s also a jagged hole around the horn/lump. Surely the army of a hornèd people would have helmets that either covered the horns or were drilled with neat holes to let the horns protrude.

A bump has a rounded top as the other has more of a pointed peak. Also, round bumps don’t have the level marks on it like horns are typically displayed with. There are 2 lines on it.

It could be either but most reasonable people, if looking at it objectively, would say a horn.

The SJP is apparently yet to wake up to the fact that it has sparked a politically loaded version of numerous viral perception debates and offer a public comment. But one can rest assured that this one won’t be simply laid to rest regardless of what they say. Just ask a certain US representative about her “all about the Benjamins” tweet.