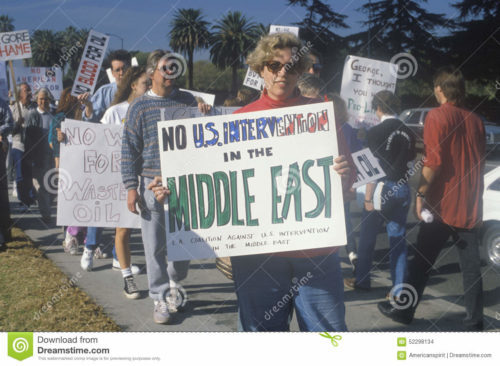 Above: Protest against US war in the Middle East in Los Angeles from DreamsTime.com.

There will be a confluence of trigger events this week that could lead to an escalation of conflict. At the same time that the US has reneged on the nuclear agreement and Israeli missiles are attacking Iranians in Syria, the US embassy will be moved to Jerusalem and Palestinians will protest the 70th anniversary of the Nakba, capping six weeks of actions. 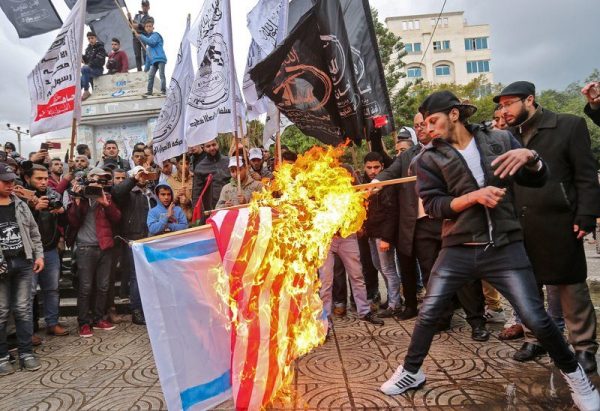 Palestinians protest move of US Embassy by burning U.S. and Israeli flags in Gaza City. Mahmud Hams for AFP and Getty Images.

On Monday, May 14, the United States will move its embassy to Jerusalem, even though the new US embassy is not yet built. Jerusalem is considered by both Israelis and Palestinians as their capital. This action is part of a 100-year history of Zionist colonization of Jerusalem.

When the announcement of the move was made, there was widespread anger. In Gaza, protesters took to the streets bearing Palestinian flags and denouncing the decision. Students held demonstrations in the West Bank. Bernard Smith of Al-Jazeera reported from Gaza, “People here compared the protests to a small ball of fire that would roll and turn into a much larger ball later on.” The decision unified Palestinians, putting aside their divisions to focus on Trump and Israel.