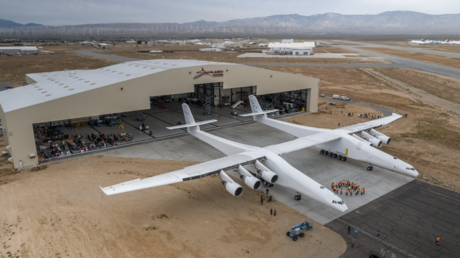 With twin fuselages and a wing of a size of a football field, the gigantic ‘Stratolaunch’ plane is designed to make propelling rockets into space easier and cheaper than traditional ground-based launch pads.

Built by California-based company Scaled Composites (owned by Northrop Grumman), the ginormous plane is designed to ferry rockets and various types of spacecraft into orbit. On Friday, it successfully completed its first test flight, flying for two-and-a-half hours above the California’s Mojave Desert without an issue.

The plane can carry up to three Pegasus rockets before releasing them into space at 35,000 feet (10,670 meters) above the ground, the company says. To complete this task, the aircraft is equipped with six engines, two fuselages instead of one, and a wing longer than a US football field, which makes it the largest plane ever built in terms of wingspan.

The aircraft is intended to make space launches easier and cheaper since it can take off from “dozens of US runways,” as well as saving fuel and flying over storms and other bad weather conditions.