A table was set up for two, an advertisement table, a table with a photo of a giant turkey, two elegant plates, and a U.S. flag sticking out into the air.

“Thanksgiving at Angkor Royal Cafe”, a flier read. And: “23rd November… Join us for a traditional Thanksgiving Feast”. 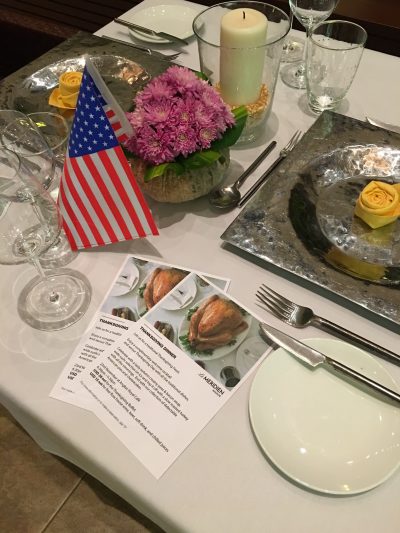 This was at one of the international hotels in Siem Reap, a Cambodian city near the world architectural treasures of Angkor Wat and the ancient Khmer capital, Angkor Thom.

The same day I read an email sent to me from the United States, by my Native American friends, with a link to an essay published by MPN News, called “Thanksgiving Guide: How to Celebrate a Sordid History”. It began with a summary:

While millions of Americans prepare this week to get into the holiday spirit, beginning with Thanksgiving, how many are prepared to view the day through an accurate lens? While to many Americans the holiday serves as a reminder to give thanks, it is seen as a day of mourning by countless of others. The truth is: European migrants brutally murdered Native Americans, stole their land, and continue to do so today.

The day became an official day of festivities in 1637, to celebrate the massacre of over 700 people from the Pequot Tribe.

In a hotel, I approached a cheerful French food and beverage manager and asked him whether he was aware of what he was suggesting should be celebrated in one of his restaurants?