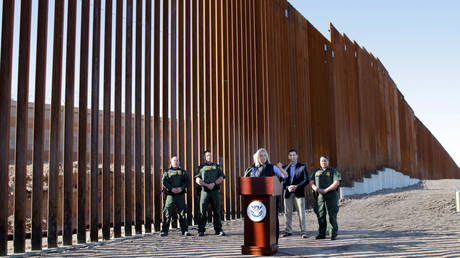 A fundraising page has been launched to buy shovels to help tunnel diggers burrow a passage underneath President Donald Trump’s controversial wall along the US border with Mexico.

The GoFundMe campaign is aiming to raise a whopping $150 million in order to help immigrants crawl beneath the president’s proposed barrier.

The effort is a tongue-in-cheek response to the popular ‘We The People Will Fund the Wall’ campaign which has crowdfunded more than $18 million to help Trump get some of the $5 billion he needs to proceed with the build. Another GoFundMe campaign to purchase ‘Ladders to Get Over Trump’s Wall’ raised more than $156,000.

“o the thousands of people raising money for a wall…..I’m raising money to supply tunnel builders with shovels,” wrote Rigo Torres, the creator of the latest fundraising drive. “I’m sure we won’t need the $150,000,000 but in all reality who gives a s***…let’s see how much I can raise.”


Torres said any money actually raised through the campaign will be donated to the American Civil Liberties Union, who will in turn “defend the rights of immigrant families and fight until they are reunited”.

The campaign has so far raised just over $4,900 from 309 donations in nine days – substantially less than the $4 million the ‘We The People..’ campaign raised in its first three days.

More than 300,000 backers – some of which have given fake names like ‘Barack Obama’ and ‘Hillary Clinton’ – donated to the wall-building cause, raising a total $18,240,463, an impressive amount but still a far cry from their goal of $1 billion.

“Democrats are going to stall this project by every means possible and play political games to ensure President Trump doesn’t get his victor,” wrote Brian Kolfage, who set up the GoFundMe page.

“They’d rather see President Trump fail, than see America succeed. However, if we can fund a large portion of this wall, it will jumpstart things and will be less money Trump has to secure from our politicians.”

The government is in the midst of a partial shutdown over Trump’s demand for an additional $5.7 billion to fund the wall – which he previously claimed would be paid for by Mexico.