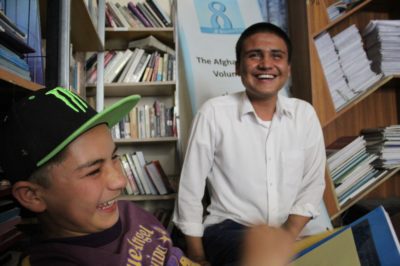 Inaam (left), Habib (right) and I (photographer) sharing a good laugh at the Borderfree Nonviolence Community Centre in Kabul

I decided to write this ninth love letter specially to Inaam, the 21st century generations of the world and the people of Okinawa because of three personal reasons.

I miss having the wonderful energies of 15-year-old Inaam at the Borderfree Nonviolence Community Centre. Inaam has to polish boots in the streets of Kabul to supplement his family’s income and to survive today’s terrible economic system.

I also wish that the vision and work of abolishing war had been “attractive” enough to keep Inaam in the Abolish War Team beyond three weeks. Inaam, born at the turn of the 21st century, deserves to live in world without war.

I write to the courageous and kind Okinawans because though Japanese soldiers killed my grandfather in World War II, the people of Okinawa and Japan are healing my father through their nonviolent resistance.

Dear Inaam, the 21st century generations of the world and the people of Okinawa,

I wish I didn’t hear you say to me, “Hakim, I think that war will never be abolished.” Have we greedy adults made it so very difficult for you to picture a humanity without war?

I know that deep down inside, you want war to disappear forever. I can see this wish on your face in the photo I took in 2015, for the Afghan Peace Volunteer’s