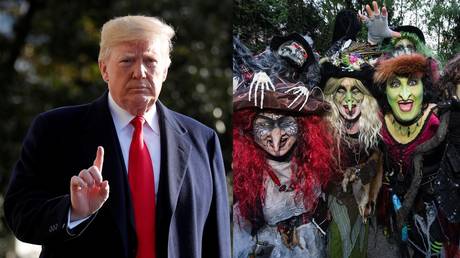 It may be the season to be jolly but that’s not going to stop witches wanting to get a piece of the press pie to tell President Trump to stop using his beloved ‘witch hunt’ mantra.

The community of wiccans are utilizing the festive season to share what means the most to them – and that’s criticising Trump for using the offensive term ‘witch hunt’. Of course, the politically correct mainstream media has felt obliged to listen to their plight.

So where are all the missing Text messages between fired FBI agents Peter S and the lovely Lisa Page, his lover. Just reported that they have been erased and wiped clean. What an outrage as the totally compromised and conflicted Witch Hunt moves ever so slowly forward. Want them!

The witches say Trump’s repeated use of the term throughout his presidency, and most recently to describe the Russia investigation, fails to recognise the “worst period in our history,”according to witch Kitty Randall.

….care how many lives the ruin. These are Angry People, including the highly conflicted Bob Mueller, who worked for Obama for 8 years. They won’t even look at all of the bad acts and crimes on the other side. A TOTAL WITCH HUNT LIKE NO OTHER IN AMERICAN HISTORY!

“If Mueller’s investigation were truly a ‘witch hunt,’ then Donald Trump would be hanging naked from chains in a cold barn somewhere, being tortured into admitting his pact with Satan, before being burned at the stake … Instead he’s golfing at Mar-a-Lago,” Randall adds.

….The Russian Witch Hunt Hoax, started as the “insurance policy” long before I even got elected, is very bad for our Country. They are Entrapping people for misstatements, lies or unrelated things that took place many years ago. Nothing to do with Collusion. A Democrat Scam!

It appears their endeavor to clear the good name of witches has been somewhat of a success. Their plight has been covered by CNN, The New York Post, USA Today, Fox News, The Daily Beast and, yes, now RT.

Trump has reportedly used the phrase more than 60 times on Twitter alone, leading some witches – including this Brooklyn coven – to take the drastic step of casting a spell on the president.

Some may not realize that Trump could in fact be referring to the McCarthyist sort of witch hunts rather than the actual bloody medieval practices, but then again, the 45th president is not always helping his critics with the context.