A few days into the New Year and iguanas are falling out of the sky in Florida.  (They’re too numb to hang onto their perches.)  Boston is recovering from flooding.   Parts of Alabama are fighting hookworm.  Trump wants $18 billion for THE WALL.  And there’s Michael Wolff’s Fire and Fury:Inside the Trump White House, the just-released exposé of life down in the West Wing. 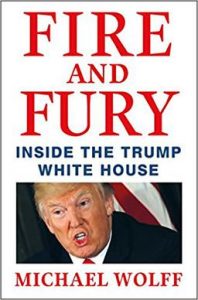 Some argue Wolff is not always reliable.  Just how much was on or off the record?  How much not fact checked?

Sure the Republican establishment is taking pot-shots, as is the New York Times, CNN, NBC, and, Fox News.  Even Glenn Greenwald of the Intercept got snippy.  But even if only 75 per cent of the reporting in Fire and Fury is accurate (which is probably way, way below a fair accounting) Wolff’s account of dysfunction in the White House is both gripping and appalling.

There’s the bitter infighting between the Bannon, Priebus and Jarvanka factions.  (Jarvanka – a combo of Jared and Ivanka – was a word coined by Bannon.) There were the screaming and often obscenity-laced Bannon meltdowns.  There was the after-6:00-PM-President lounging in bed watching three giant TV screens, grumbling, screaming, talking forever to Roger Ailes, Rupert Murdoch and un-named others.  (Presumably, it was these others who relayed the conversations to Wolff.)

There’s the repeated assertions by various staff that the President of the United States cannot or will not read – anything,…