The Federal Energy Regulatory Commission (FERC), which is overseeing the development of a new interstate natural gas pipeline, has opened an investigation into the spill of 2 million gallons of toxic drilling fluid on Ohio’s wetlands.

The spill from a horizontal directional drill operation was first reported to the Ohio Environmental Protection Agency in April.

On May 10, FERC confirmed the leak of 2 million gallons of bentonite-based drilling fluid from the Rover pipeline which had covered 6.5 acres, or 6.5 football fields, of Ohio wetland.

Ohio’s EPA tested samples from the site and found “the presence of petroleum hydrocarbon constituents, commonly found in disease fuel, in samples of the drilling fluid from various locations near the HDD of the Tuscarawas River.”

FERC ordered the suspension of further drilling on the Rover project, pending an investigation into why petroleum hydrocarbons appeared in the drilling fluid.

“The presence of diesel fuel in the drilling mud is inconsistent with the commitments made by Rover on which the Commission relied to certificate its project,” FERC stated.

“Although we have no reason at this point to believe the release represents an imminent threat to human health or the environment, this incident raises concerns about potential long-term environmental impacts, including impacts on sensitive wetlands in Ohio.”

The Rover pipeline is being constructed by the same company which built the Dakota Access Pipeline. The $4.2 billion conduit is being built to run southeast to northwest across Ohio for 551 miles, and will transport natural gas to Ohio, Michigan, West Virginia and Canada.

The company also owes the state $1.5 million in restitution fees for demolishing a historic house last year. The incident led to FERC ordering Rover to seek federal approval at every stage of construction rather than issuing a blanket construction permit. With the restrictions, FERC approved the project in February.

Since then, the construction project has already caused seven industrial spills and has angered local farmers. When construction occurred during heavy rains, crews disposed excessive water by dumping it on farmers’ fields which affected farming.

Between April 5 and May 8, the Ohio EPA cited Energy Transfer at least 16 times for improperly disposing of sediment-laden waster in steams.

On April 8, workers reported an “inadvertent release” while drilling near the Indian Fork River in Eastern Ohio.

“We’ve not seen a project in Ohio with spills at this size and scale, and if we can’t even trust Rover to construct this pipeline, how can we trust them to operate it when it’s complete?” Heather Taylor Miesle, executive director of the Environmental Council told Bloomberg. 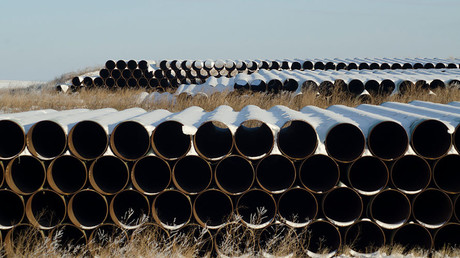 The pipeline is due to be completed by November 1, with the company standing to lose more than $10 million a week if it misses the deadline, according to Bloomberg.

Energy Transfer Partners said they are working with FERC and OEPA to resolve the issues to “ensure the complete remediation of these areas.”

Standing Rock tribal chairman Dave Archambault II told the Guardian in May the spills were a sign of bigger problems to come.

“The fact that the Dakota Access pipeline has already suffered from multiple leaks prior to even being fully operational perfectly highlights what the tribe has said all along: pipelines are not safe. Allegedly no water has been contaminated yet, but at this rate of failure it is only a matter of time,” Archambault II said.

Before the controversial Dakota Access Pipeline (DAPL) became operational, it had two leaks of more than 100 gallons of oil in North Dakota.

Two barrels, or 84 gallons, spilled due to a leaky flange at a pipeline terminal in Watford City on March 3, according to the North Dakota Health Department. A flange is a section connecting two sections of pipeline.

The department’s incident report said the oil flow was immediately cut off and the spill was contained on the site. Contaminated snow and oils was removed and no people, wildlife or waterways were affected.

In a separate incident, a leak of half a barrel, or 20 gallons of oil, occurred on March 5 in rural Mercer County, according to data from the federal Pipeline and Hazardous Materials Safety Administration.

Contaminated soil was removed and as in Watford, no human and animal life or water routes were affected.