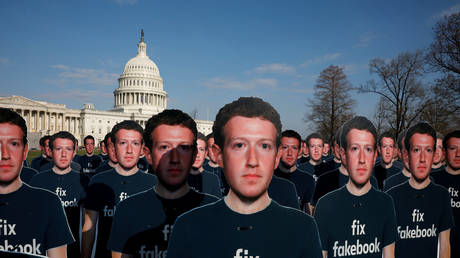 Facebook’s shareholders are gearing up for a fresh attempt to oust its founder and CEO Mark Zuckerberg as chairman, as well as shake up the company’s governance, in the wake of “severe controversies” for the social network.

Documents filed by Facebook to the Securities and Exchange Commission (SEC) on April 12 outline the schedule of business for the company’s annual shareholder meeting at the end of next month, and include eight shareholder proposals. One of these calls for replacing Zuckerberg as company chair with a new independent member, so as to clearly separate the roles of company chair and CEO.


In the filing, stockholders complain that Zuckerberg holds about 60 percent of Facebook’s voting shares, meaning the board has “only a limited ability to check Mr Zuckerberg’s power.”

“We believe this weakens Facebook’s governance and oversight of management,” they continue, adding that this has resulted in the company “missing, or mishandling, a number of severe controversies” including Cambridge Analytica’s access to user data and the “proliferation of fake news.” Facebook’s share price has had a rough ride in the wake of the series of scandals.

In its response, Facebook said the board believes “that the most effective leadership model is that Mr Zuckerberg, our founder and controlling stockholder, serves as both chairman and CEO,” and that “implementing the proposal is unnecessary.”

Also on rt.com
If we lose WikiLeaks, we lose a whole stratum of freedom — Pilger


Given that Zuckerberg currently holds over half the voting power at Facebook, he is expected to survive the ballot. A similar move to force him out was rejected at the annual stockholder meeting two years ago.

The SEC filing also outlines the board’s stance on all of the proposals being tabled, saying they recommend stockholders vote ‘for’ their proposals, including the election of the board, and ‘against’ each of the eight motions suggested by stockholders.

The other stockholder proposals include readjusting the company’s share structure and the voting rights of shareholders, and compelling Facebook to provide greater insight into the company’s gender pay gap.