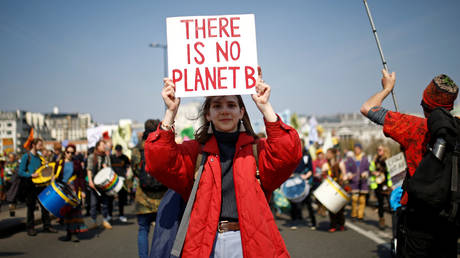 Environmental protesters have mobilized to take over five of London’s most iconic locations, bringing streets to a standstill, with the aim of forcing the UK government to take serious action on the “global climate emergency.”

Extinction Rebellion (XR), an environmentalist group responsible for causing scenes in the House of Commons earlier this month when semi-naked activists stripped off in Parliament as MPs tried to debate Brexit, claim they intend to occupy the roads for at least 72 hours.

Social media was awash with pictures and videos of activists blocking the streets of Oxford Circus, Waterloo Bridge, Marble Arch, and Parliament Square with banners and sculptures, including a massive pink boat sporting the words: “Tell the Truth.”

Their plans are to bring London to a standstill with similar round-the-clock blockades in Parliament, Oxford Circus, Piccadilly Circus and Marble Arch @LBCpic.twitter.com/v6G3YjR7FV

They’ve picked a nice day to bring Marble Arch to a standstill. Just seen a middle-aged woman holding a placard with a wonderfully English apology for their rebellion: “Sorry for the inconvenience but I really don’t know what else to do.” pic.twitter.com/Z54dUYRlmN

At the Extinction Rebellion protest at Marble Arch where someone calling himself Sustaina Claus and clutching a toy panda has led a call to save the planet. They’re now going to block Hyde Park Corner with performance art. pic.twitter.com/PkgW7JNxIe

XR claim more than 2,000 volunteers have signed up to the UK part of what organizers hope will be an international week of protest. Monday will see protesters in around 80 cities in more than 33 countries hold similar demonstrations on the same environmental issues, campaigners say.

“This will be a full-scale festival of creative resistance, with people’s assemblies, art actions, stage performances, talks, workshops, food and family spaces,” the group says on its website.

The demonstration, which XR describes as non-violent civil disobedience, comes on the back of similar action in November that saw thousands of protesters occupy five bridges in central London. Police arrested 85 activists that day and organizers say they expect further arrests on Monday.