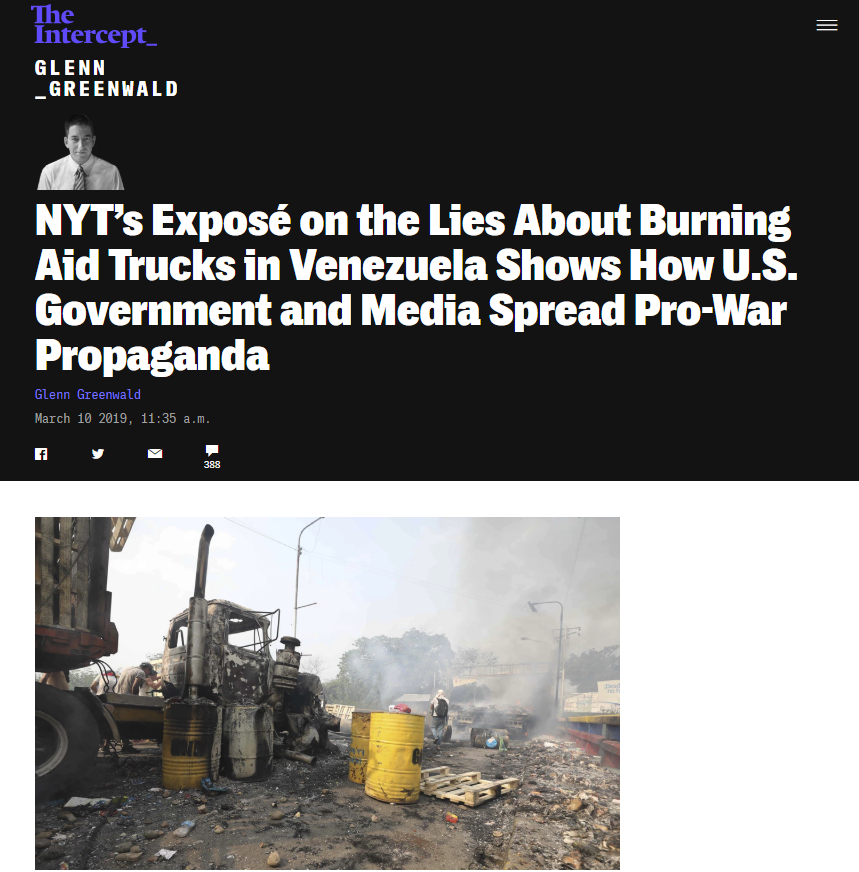 Listeners will likely know by now, that the late February story, complete with vivid video footage, about the forces of elected Venezuelan President Nicolás Maduro burning trucks that were trying to bring the besieged country food and medicine was false. Weeks later, the New York Times (3/10/19) reported that the humanitarian trucks were not set on fire by Maduro’s forces, but instead by anti-Maduro protestors who threw a Molotov cocktail. The Times outlined how the fake story took root, passing from US officials to media that simply reported their claims as fact with no investigation—and does any of this sound familiar?

Folks like CNN‘s Marshall Cohen noted the Times debunking as if it were just an interesting development—a “classic example of how misinformation spreads,” Cohen said in a tweet. Except, as The Intercept‘s Glenn Greenwald pointed out (3/10/19), it was Cohen’s own network, CNN, that led the way in spreading the lie around the world.

And not simply by parroting official claims. On February 24, the network told viewers that “a CNN team saw incendiary devices from police on the Venezuelan side of the border ignite the trucks.” It was then we got to Mike Pence claiming that “the tyrant” Maduro “danced as his henchmen…burned food and medicine”; Marco Rubio’s comment that “each of the trucks burned by Maduro carried 20 tons of food and medicine. This is a crime and if international law means anything, he must pay a high price for this”; Mike Pompeo’s fist-shaking, “What kind of a sick tyrant stops food from getting to hungry people?”

It isn’t merely that corporate media will never, in a million years, go back to each of these people and demand to know why they won’t insist on the same sort of response, now that it appears it was Maduro’s opponents who were to blame. It’s more that the very news dissemination process here superficially being indicted will not itself be reconsidered. 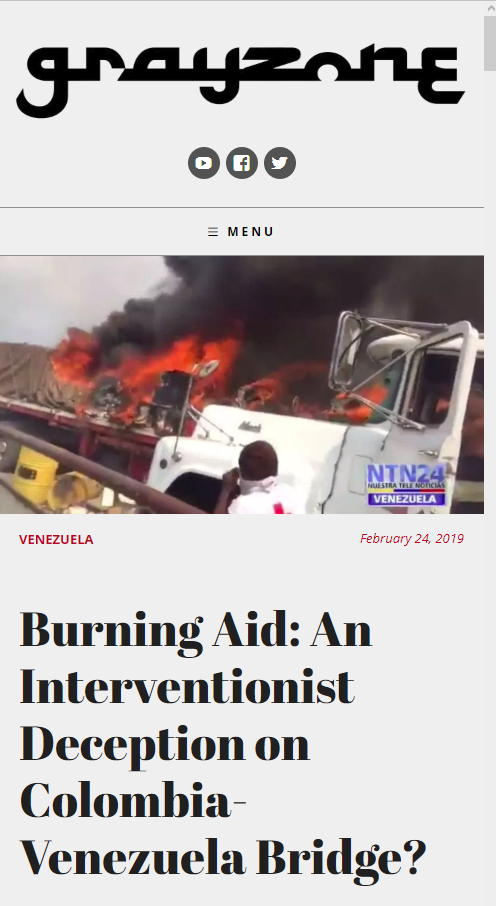 After all, this false story arrived embedded within another false story: that the Venezuelan government is blocking needed humanitarian aid to the country. The Venezuelan government has and does allow aid into their country—from countries that are not actively and vituperatively threatening to overthrow the elected president with an external coup. Groups from the Red Cross to the UN have challenged the US’s earnest claims of humanitarian concern. NPR (2/16/19) acknowledged that US moves are not simply humanitarian, but “also designed to foment regime change in Venezuela—which is why much of the international aid community wants nothing to do with it.”

That, plus the evidence that it was in fact opposition protesters that burned the trucks, would suggest a real flipping of the current script, and with it some consideration of how that script got written in the first place. But, as  happened with those raising questions about evidence of Saddam Hussein’s possession of weapons of mass destruction—or the Cuban airfield in Grenada, or Iraqis throwing babies out of incubators, or North Vietnam firing on US ships in the Gulf of Tonkin—the outlets that vigorously pushed the false story will not extend any new skepticism toward the official sources that sold it to them. Nor will they offer any new respect—or platform—to the people (like Max Blumenthal, like Boots Riley) who questioned the claim…not weeks later, but in real time.

Those official sources will still be central and those asking questions will still be marginal. Those who cannot believe that the US government is working, with corporate media support, to set up a false storyline to push the public to support another war on another country might at this point ask themselves: If they were doing that, how would that look different than what we’re seeing now?