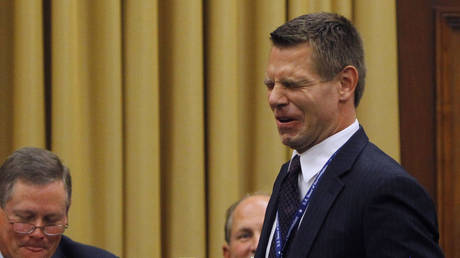 Another moderate centrist is joining the pack of Democratic candidates surging forward to the 2020 US presidential election – only this one has Twitter-threatened to use “nukes” on gun owners.

Rep. Eric Swalwell (D-California) has announced he is joining the fight to unseat President Donald Trump, apparently deciding his six years in Congress, two kids, and six-figure student loan debt have made him an ideal spokesman for the vanishing American middle class. He dropped the bombshell on Stephen Colbert’s “Late Show” on Monday, promising “bold” leadership to the millions of Americans who “feel as if they’re just running in place.”

Swalwell joins more than a dozen other Democrats also seeking the nomination and faces an uphill battle to distinguish himself from the pack – Kamala Harris is already representing California, while failed Texas Senate candidate Beto O’Rourke has the “speak with gravitas, while saying relatively little” position locked down. South Bend, Indiana mayor Pete Buttigieg rivals both of them for “(comparatively) young buck with soap-opera looks.” Another relatively little-known Democrat, Ohio congressman Tim Ryan, announced his candidacy on Thursday on another popular talk show, so Swalwell can’t even claim temporal-situational distinction.

“Donald Trump is being impeached. It’s just a matter of whether it’s at the ballot box or in Congress. But he is not going to be President on January 20, 2021 – I’m certain of that,” Swalwell told SF Chronicle’s ‘It’s All Political’ podcast last week. He has repeatedly touted his “national security experience” and serves on the House Judiciary and Intelligence Committees, though he has de-emphasized his role in the various Trump probes in recent weeks with the ignominious death of Russiagate at the hands of Special Counsel Robert Mueller. He also worked as a prosecutor before unseating a 40-year incumbent to take his East Bay congressional seat.

But because “moderate law-and-order centrist” doesn’t move people to the polls like it used to, Swalwell has cast himself as the Gun Control Candidate, to the extent that he appeared to threaten uppity gun owners with nuclear bombs when challenged on Twitter last year.

And it would be a short war my friend. The government has nukes. Too many of them. But they’re legit. I’m sure if we talked we could find common ground to protect our families and communities.

The argument began with a column the congressman had written in USA Today, calling for a ban on “military-style semi-automatic assault weapons” as well as criminal prosecution for those who chose not to hand over such weapons. When commentator Joe Biggs characterized this as a declaration of war against American gun owners, Swalwell went, well, ballistic, claiming the government would win that “short war” – because it “has nukes. Too many of them. But they’re legit.”

Swalwell later said he’d meant the comment as a joke but, having failed to distinguish himself in media coverage since then, that Twitter scuffle remains the primary association many Americans have with his name. He’s tried to make amends with Democratic gun owners since then – just last week he was conspicuously photographed with Shannon Watts, founder of Moms Demand Action for Gun Sense in America, at a shooting range for an annual veterans’ event – but still plans to center his campaign on gun control, with some help from Parkland shooting survivor Cameron Kasky, with whom he will appear at a town hall this week.

Also on rt.com
Mueller’s probe is over, but bogeyman Russia will come in handy for 2020 presidential hopefuls


While Swalwell has visited his home state of Iowa 16 times in the past two years, nearly three-quarters of likely Democratic voters in that state still didn’t know enough about him to form an opinion when asked in a poll last month. He was not named as anyone’s first choice for the nomination and, of those who had heard of him, a third had a negative view. Iowa holds the country’s first presidential primary, along with New Hampshire, and failure to make a good showing there can doom a candidate’s campaign.