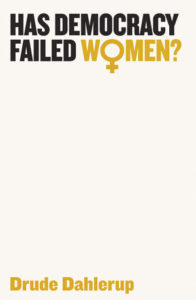 Has Democracy Failed Women? by Drude Dahlerup challenges conventional wisdom that Greece was the birthplace of democracy, as it totally excluded women from participation in the political process.

The book starts with a brief review of women’s battle long difficult battle for the right to vote. New Zealand was the first to grant women a vote in national elections in 1893. Other English-speaking countries, including Britain, enacted women’s suffrage following World War I. Catholic countries, including France, Italy, Chile and Argentina waited till World War II ended. It was 1971 before women could vote in national elections in Switzerland.

It’s well established that democratic assemblies with inadequate female representation, are incapable of addressing the continuing oppression women experience under capitalism.* Yet more the 100 years after first receiving the right to vote, women (who comprise 52% of the population) are still denied full representation in the institutions of power. In the West, only two parliaments have granted women full parity (40-60% representation). In the global South, only Rwanda and Bolivia have as many women as men in their assemblies.

Dallerup blames the “secret garden of politics,” the failure of most political parties to select candidates in a transparent or democratic process, for women’s failure to receive fair representation in government. In most places, party officials limit their candidate pools to well-established…