After receiving a letter signed by US President Donald Trump, a retired English teacher checked its grammar and posted her corrections online, earning both praise as “a hero” and scorn for being “sanctimonious and self-serving.”

Yvonne Mason, an English teacher of 17 years who retired last year, has landed in the spotlight after she posted a picture of the Trump-signed letter she received in March. It was a response to her earlier letter calling on Trump to personally meet with the relatives of the Parkland shooting that left 17 people dead in February. Far from being elated that someone in the Trump administration took the trouble to respond, Mason scrutinized the letter for mistakes, finding as many as 11. That is discounting stylistic choices and the excessive use of the pronoun “I.”

At the center of Mason’s grievances, however, were the cases of what she believed to be instances of improper capitalization of words such as “state,”“nation,” “federal” and “president.” In her corrections written in the letter’s margins, she noted that words relating to the government are only capitalized when they are part of proper nouns.

Some commenters were quick to point out that the supposed “mistakes” in capitalization are actually in line with an actual style manual used by government officials.

Trump, meanwhile, is known to take liberties with capitalization, often using it for emphasis in his tweets. 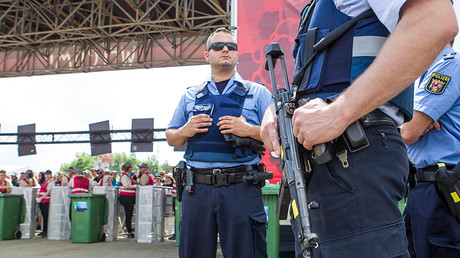 While being her typical teacher self in the letter, Mason stopped short of actually assigning a mark. Speaking to Greenville News, she said it would not score high.

“Things like this make me thankful you’re a retired teacher,” one commenter, who said she was also a teacher, wrote. “I will strive every day not to come across to my students as sanctimonious and self-serving like you do in this letter.”

The letter penned by Trump, or, most likely by one of his numerous staffers, describes a series of legislative initiatives put forward by his administration, but never gets to the issue at hand – the chance of him meeting with those affected by the Parkland shooting.

“It didn’t address the letter I wrote,” Mason stressed.

The fact that the White House chose to take the time to write back to Mason might not be a coincidence, considering the amount of mail she has sent them. Mason has been sending Trump a postcard every day in what she says is her own peculiar way of contributing to democracy.

Mason says she has been a dedicated advocate of “clear, precise writing,” encouraging officials to use the plainlanguage.gov website. Some of her critics, though, argue she is picking on Trump just for the sake of it.

While the Republican at the top may not have the reputation of a top-notch writer, there’s at least one person in the GOP who has managed to satisfy Mason’s high standards. She has complimented Senator Lindsey Graham (R-South Carolina) for writing “exquisite letters.” Graham, along with Senator John McCain (R-Arizona), has been one of the loudest anti-Trump voices among Republicans.

Since Mason posted the letter on Facebook on May 15, it has been shared almost a hundred times, generating a lively debate in the comment section, with commentators dividing into two camps. While many applauded Manson’s gut, calling her a “hero,” others pointed out that as a self-proclaimed language purist she made a mistake herself using “y’all” in the corrections.

“I stopped reading the ‘corrections’ as soon as I saw ‘y’all’. How are you going to correct someone’s grammar and punctuation while using incorrect grammar yourself?” Mark Adams wrote, arguing that the condensing manner of Manson’s remarks shows that she “clearly didn’t care about the initial issue that you supposedly wanted to address.”

“Howdy ‘y’all’? At least we learned how this one starts her corrections,” another user chimed in.

Most of the critical comments were quickly picked apart for bad grammar by her enthusiastic supporters.

Manson herself appeared to admit that her opinion on the use of capitals might not be the only correct one, but she said she doesn’t care.

“I don’t mind civil disagreement at all. Several style manuals agree with my assessment, so I’m not bothered a bit. Note that my beef is with mechanics. I didn’t even start on style,” she wrote.