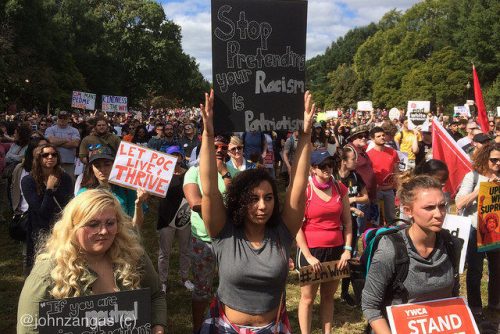 Last weekend, tens of thousands of people marched in Washington, DC in the combined March for Racial Justice and March for Black Women. Native Americans joined black and brown people to lead the march.

White Supremacy has been given aid and comfort by a so-called president and so-called administration, and so-called leaders of that ideology are comforted and feel that they are back as a centerpiece of American political life.

From coast to coast, it is true that white supremacists are active and are being more visible than they have in decades. This weekend, Richard Spencer held another torch rally in Charlottesville. In Houston, fascists attacked a left-wing book fair, and the book fair organizers had to take action to protect attendees while police did not respond. Similar events happened in Portland, OR, San Diego, New York and Washington, DC.

Not all events are successful. In San Francisco, International Longshore and Warehouse Union (ILWU Local 10) members and allies prevented a right-wing racist and violent group from holding a rally, thwarting the group at every attempt. And sometimes, white supremacists have to go to great lengths to hide their gatherings. David Lewis reports on how he infiltrated a secret convention in Seattle and saw how fascism is growing in Seattle the liberal city of the Northwest.

White supremacy is not new, and it manifests itself in many ways, not only in overt white supremacists, but also…