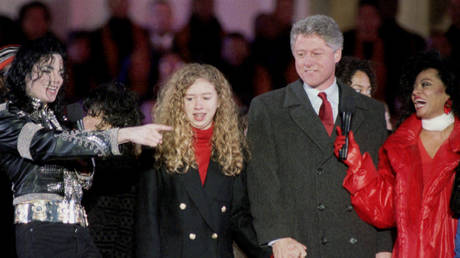 Singer Diana Ross has come under social media fire after the diva expressed support for the late Michael Jackson, following renewed allegations that the King of Pop sexually abused boys at the peak of his career.

Calling Jackson a “magnificent incredible force” to her and others in a tweet on Saturday, the Supremes singer referenced her 1965 hit in asking the two accusers of a recent HBO documentary “to stop in the name of love.” In it, the two adult men document allegations of molestation by Jackson while they were kids and working in the entertainment industry in the 1980s and 90s.

This is what’s on my heart this morning. I believe and trust that Michael Jackson was and is A magnificent incredible force to me and to many others.
STOP IN THE NAME OF LOVE

Her comments in support for Jackson come after fellow singer Barbra Streisand received a whirlwind of outcry for saying in a recent interview that the alleged abuse “didn’t kill” the victims. Streisand later apologized for her comments saying she was “profoundly sorry” for any “pain or misunderstanding.”


Ross’ tweet found some vindication among his fans who thanked her for her support for Jackson amid the allegations. However, many expressed consternation at her comments, prompting yet another wave of disgust from netizens on social media.

Million thanks to you, Diana. Michael loves you too🌹🌹🌹

I’m sure Michael had real good side. A lot of people, heck everybody has some good as well as bad. He had problem’s. He was child like & i expect he was generous. R.I.P. Michael

The truth already came out, it’s public record except the mass media refuses to report it. They deliberately refuse to allow Brandi Jackson on air because they know her story ruins Robson’s narrative and timeline

Well if he performed at the Bill Clinton Inaugural Gala and was allowed 3 songs then there is no way he could have been a pedophile you guys!!! pic.twitter.com/oJIfHPwJnU

In other words “he didn’t hurt ME so I don’t care what he did to anyone else.” Gross.

— This Barbara Does NOT Support Child Rape (@barbaramcthomas) March 23, 2019

The problem is that you may believe that and he probably was the amazing person you knew and loved. But you do not know that he didn’t do what he is accused of, there’s no way you could know definitely. Take a step back from YOUR relationship, and look at these peoples stories.

You’re aff yer heed. He’s a paedophile who should have been imprisoned a long time before he died. Would you have been tweeting this if he’d been a plumber…oh sorry you’d have had no idea who he was then would you?

No Diana, just no. Just because you knew and liked someone doesn’t mean they’re innocent. You saw him with those boys and never thought it was strange for an adult to not have friends his age? One of the boys was 7 when the grooming and abuse started! What’s wrong with you?