Managers at budget airline Ryanair are pleading with pilots to return to work after a scheduling a meltdown caused thousands of flights to be cancelled and entire routes to be axed. Around 700,000 bookings have been cancelled for 2017 due to the pilot shortage.

Former employees say they were badly overworked and often had to pay for their own hotels while abroad. Ryanair vehemently denies the claims.

Bosses for the budget airline said that they have been swamped with applications for the pilot jobs. But on Wednesday night, a different story emerged.

Ryanair’s flight operation manager Elaine Griffin was forced to plead with former staff to return, insisting that things have changed in the company – offering pay rises of “around 20 percent” for pilots and first officers.

“If you are interested in having a conversation about returning to Ryanair, we would be delighted to hear from you. Please let me know if you are open to a conversation on this, or if you have any specific queries, and I will give you a call,” she wrote in an email, seen by the Daily Mail.

The changes implemented by Ryanair include “significantly increased resources in pilot rostering, crew control, bases management and training,” according to the correspondence

The airline is also attempting to poach pilots from its rivals. 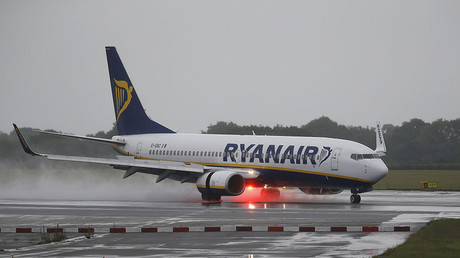 “We would be delighted to hear from you and would be happy to address any questions you may have.”

Ryanair Chief Executive Michael O’Leary is facing fresh embarrassment over the handling of the crisis just months after he threatened to withdraw UK-EU flights because of Brexit. At that time, the businessman mocked the Government and Theresa May’s handling of negotiations.

The airline has been forced to completely cancel routes and offer refunds in the midst of the scheduling crisis.

“This just shows how desperate they are to recruit pilots and stop the exodus. It’s not money that people are after, it’s a modern, up to date contract,” they told the Daily Mail.

Last night, a Ryanair spokesman told the Mail: “We have sent this letter to a small number of pilots. We have recruited over 860 pilots this year.”