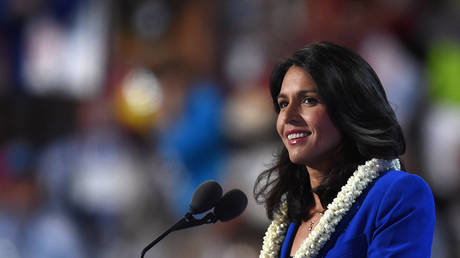 With Representative Tulsi Gabbard (D-Hawaii) entering the 2020 presidential fray, establishment figures on both Right and Left are scrambling to smear the anti-war congresswoman with impeccable identity-politics bona fides.

Ever since her 2017 visit to Syria, Gabbard has been condemned for daring to seek firsthand accounts rather than blindly trusting the MSM narrative, so on Friday the pundits were again off to the races, with fresh accusations of Assad-sympathizing.

Tulsi Gabbard’s disturbing and singular denialism of Assad’s role in the brutal butchering of his own people, obliging a meeting with him and spreading his propaganda should be disqualifying. pic.twitter.com/EI3UiEvLuu

Gabbard’s association with Hindu nationalists is odd, but her track record as an Assad apologist strikes me as being way more disturbing and likely disqualifying if she tried to run in 2020. https://t.co/bj4XoHvrEq by @shankarmya

“Assad apologist” seems to be the Tulsi equivalent of “Putin puppet,” judging from the early tweets, though she was accused of being one of those too.

My support for every other Democratic 2020 candidate still stands. But Tulsi Gabbard? Hell no. She should have been banned from the party a long time ago. Fucking monster. She’ll use her campaign to try to destroy the Democratic Party during the primary. I won’t allow it.

The funny part is, looking through all the tweets mentioning “Tulsi Gabbard” right now, the only ones saying positive things about her are Trump supporters and alt-right. Their deranged fantasy is that she turns the Democratic Party into a right wing puppet of the Kremlin.

Gabbard certainly poses a thorny problem for the neocon-neoliberal axis, as she checks all the identity politics boxes – the first Hindu member of Congress, a woman, a veteran – and she has undeniable populist appeal, given her anti-establishment record. While Gabbard is a Democrat, she was emphatically not a Clinton supporter, resigning as vice chair of the Democratic National Committee in February 2016 to endorse Bernie Sanders in the primary.


But Republicans, too, felt the need to speak up against her. “Liberals think she’s too conservative, conservatives think she’s too liberal, and just about everyone thinks her coziness with Bashar al-Assad is disturbing,” Republican National Committee spokesman Michael Ahrens said, also mentioning the congresswoman’s “lack of experience.”

“Assad’s ‘mouthpiece’ in Washington” —RNC welcomes Tulsi Gabbard to the presidential race with a moniker that many liberals probably agree with as well pic.twitter.com/WJJrP1aJv1

The RNC released a “cheat sheet” of talking points following the news of Gabbard’s pending announcement, though some took that as a sign of weakness.

The fact the GOP took the time to tweet out an infographic about her when they’ve only ever mentioned Kamala Harris on their Twitter feed one time ever, as far as I can tell, says a lot about the potential of her candidacy

The Israel-first crew made its opinion known, though no one really asked them.

Everyone in the pro-Israel lobby (myself included) is already talking about how to make sure that Tulsi Gabbard’s campaign is over before it even gets off the ground — If you’re going to bet on a Dem candidate, look elsewhere 🇮🇱

Others didn’t even bother with “issues” or “facts,” preferring guilt by association and personal insults.

These are the Tulsi Gabbard fans—Russian propaganda outlet and a KKK grand puppy dragon or whatever pretentious-ass title they give themselves. https://t.co/v3XXH8NAUO

I couldn’t be more thrilled that @TulsiGabbard announced she’s running for president.

Because now all the think pieces exposing her for being just terrible can be published and people can stop pretending she gets a pass on her messed up record for whatever freaking reason.

Tulsi Gabbard is an insane person, please stop talking about her like she’s a reasonable choice to lead anything