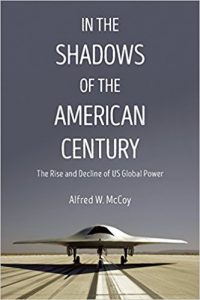 Prior to 2001 and the launch of the War on Terror, the US political elite adamantly denied (despite massive evidence to the contrary), that the United States was an empire rather than a republic. Because their sudden about face (i.e., acknowledgement and promotion of US imperialism) was so recent, there has been little opportunity for scholarly analysis of America’s effectiveness as an empire. It’s this void Alfred McCoy seeks to fill with In the Shadows of the American Century: The Rise and Decline of US Global Power.

Competition for Control of the Eurasian Landmass

McCoy traces America’s serious global empire building to their defeat of Spain in the Spanish-American War in 1898, which won them Puerto Rico, Cuba, the Panama Canal Zone and the Philippines. He maintains that US strategies for empire-building, like those of the former British empire, have mainly relied on seeking and maintaining control of the “World-Island.” The is a term coined by London School of Economics director Halford Mackinder’s World Island in 1904. Under this concept, the World Island consists of the vast European-Asian landmass that is home to 70% of the world’s population, 75% of its global energy resources and 60% of its current productivity.

How the US Maintains Military Control

After the US became the world’s preeminent superpower after World War II, they have used nine basic strategies to maintain military control of the Eurasian landmass: mass surveillance (based…