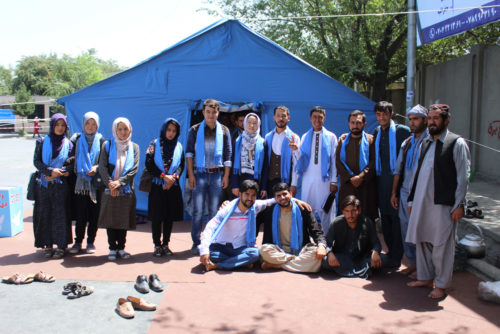 On January 27th, 2019, the Taliban and the U.S. government each publicly stated acceptance, in principle, of a draft framework for ongoing negotiations that could culminate in a peace deal to end a two-decade war in Afghanistan.

As we learn more about the negotiations, it’s important to remember others working toward dialogue and negotiation in Afghanistan. Troublingly, women’s rights leaders have not, thus far, been invited to the negotiating table. But several have braved potential persecution to assert the importance of including women in any framework aiming to create peace and respect human rights.

A young medical graduate student told me she was deprived of schooling during the Taliban era. “If government doesn’t protect women’s basic rights,” she said, “we could lose access to health care and education.”

“The war was started by men, the war will be ended by men,” an aide to Rula Ghani, the wife of President Ashraf Ghani, recently told a Reuters reporter. “But it’s the women and children who suffer the most and they have a right to define peace.” In 2018, the UN expressed alarm at the increased use of airstrikes by U.S. and Afghan forces which caused a rising death toll among women and children. In the run-up to the past week of negotiations and even during the negotiations, attacks and counter attacks between the warring parties killed…