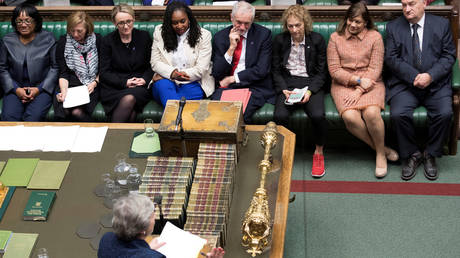 The Brexit deal debate between Labour’s Jeremy Corbyn and Prime Minister Theresa May got so raucous, fast-paced and sharp, that the UK House of Commons likely got as close as it ever had to hosting a rap battle.

LATEST: PM Theresa May tells Conservative lawmakers she will step down if they approve her Brexit deal

In between cheering, booing and insult shouting, Speaker John Bercow announced the opponents in turn much in the way a referee announces the competitors of a wrestling match. In their less than a minute long tit-for-tat responses, Corbyn and May managed to pack in ultimatums, personal insults and somewhat tedious arguments about details in May’s compromise-oriented Brexit proposal.

Corbyn proved not shy in planting the UK’s woes squarely at the feet of his opponent, saying that May is “frankly unable to govern.”

This country is on hold while the government is in complete paralysis. The vital issues facing our country from the devastation of public services, to homelessness, to knife crime have been neglected.

“Either listen and change course, or go. Which is it to be?” Corbyn offered the prime minister. The words seemed to echo rumors that have been circulating about May setting a date for her resignation over the botched deal.

May hit back citing her plan’s virtues, such as canceling the country’s EU membership fees and granting them the right to decide their own immigration policy. She stressed that refusing her version of the deal could risk delay, and even “never delivering Brexit.”

Corbyn snapped back suggesting that May continues to pedal the same deal that had already been voted down twice, including with “the largest ever majority by which a government has lost a vote in our recorded parliamentary history.” He also accused her of “blackmailing” MPs into accepting the proposal. The two then clashed on the topic of a Customs Union to facilitate EU-UK trade relations post-Brexit, which is not included in May’s deal.

Things got even more personal when May started encroaching on Labour’s territory, saying that her government had enhanced workers’ rights, while Corbyn’s lead would have seen the UK quitting NATO and seeing the pound collapse.

The biggest threat to our standing in the world, to our defense and to our economy is sitting on the Labour frontbench

Labour will have its own chance to put forward a Brexit plan on Wednesday, as eight of the 16 different options for Brexit have been selected for indicative votes in Parliament. MPs are trying to break the deadlock over the deal after voting to wrest the process from May’s hands.