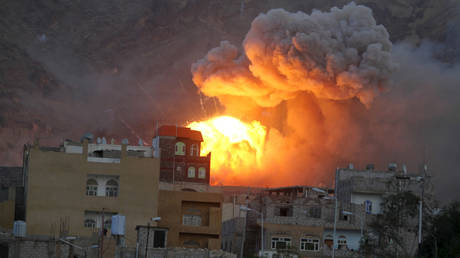 The US House of Representatives has voted in favor of ending US involvement in the war in Yemen, but the bill is expected to be vetoed by President Donald Trump as the White House cites “serious constitutional concerns.”

The House voted 247-175 in favor of the resolution to direct Trump to end US military involvement in the war within 30 days and to end support for the Saudi-led coalition that it has been backing.

Congress is “no longer going to ignore its constitutional obligations when it comes to foreign policy,” said Democratic Rep. Eliot Engel, who chairs the House Foreign Affairs Committee, adding that the war in Yemen, now in its fifth year, “demands moral leadership.”

Also on rt.com
‘How does this serve US interests?’ Gabbard slams decision to sell Saudi Arabia nuclear weapons tech


The vote marks the first time both chambers of congress have invoked the 1973 War Powers Resolution in an attempt to stop a foreign conflict.

The top Republican on the Foreign Affairs Committee voted against the resolution on Thursday, however. Rep. Michael McCaul said the vote was a “radical interpretation” of the War Powers Resolution which would have “implications far beyond Saudi Arabia.”

Thousands have already been killed during the conflict which the United Nations has said is the world’s worst ongoing humanitarian crisis, leaving millions on the brink of famine.

The move to end US involvement in the conflict gained momentum in recent months as the killing of journalist Jamal Khashoggi at the Saudi consulate in Istanbul last October shone a spotlight on Riyadh’s human rights abuses.

The CIA has implicated Saudi Crown Prince Mohammed bin Salman in Khashoggi’s death, but Trump admitted in the aftermath of the killing that the US response could not be too harsh as he did not want to lose the “massive amounts of money” of from US-Saudi weapons deals. But opposition to Riyadh grew among lawmakers from both parties in congress, who criticized Trump for not taking a tougher line against the Saudi kingdom.

The US-supported war in Yemen is one of the worst atrocities in the last two decades. It’s a huge stain on Obama & Trump’s legacy. The bill passed today by the House to end US involvement in the war in Yemen is of historic importance: both for war powers & humanitarianism.

US Secretary of State Mike Pompeo said last week that passing the legislation would not help the people of Yemen, but “work to their detriment.”

If Trump vetoes the bill as expected, it will be the second veto of his presidency. His first was on a resolution to overturn his declaration of a “national emergency” at the southern border.