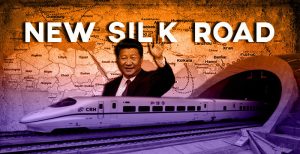 Major changes are roiling the states, societies and ruling classes of the biggest industrial economies, oil regimes and military complexes.

China is re-allocating its economic wealth toward building the most extensive modern infrastructure system in history, linking four continents.

Saudi Arabia is transferring a trillion dollars of pillage from princes to princes, from old business parasites to up-to-date versions, from austere desert mirages to fantasies of new mega-cities.

The United States is emptying the swamp of the Capital’s corruption and immediately replenishing it with the scandal of the day.

One Cabinet Secretary is fired; another Secretary is hired; one enemy is embraced; an ally denounced; the stock market flourishes and trade agreements are abandoned. One tax is sliced and pleases the powerful; another is spliced and chokes the consumers.

Turmoil, some would say; chaos, others would claim. And the stouthearted argue, that’s the way the world turns round.

‘Shaking up’ occurs where visions of wealth and prosperity accompany science and discovery.

‘Shaking down’ is where the science of palace coups and the art of bloody intrigues fleece the poor while enriching and amusing the powerful.