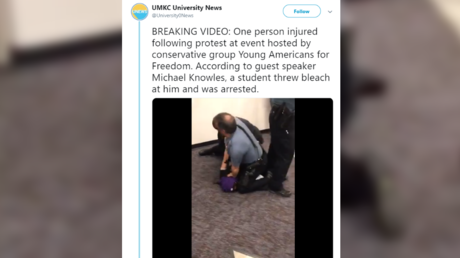 A protestor was arrested Thursday night for spraying conservative political commentator Michael Knowles with an unknown substance at an event at the University of Missouri, Kansas City.

The firebrand Fox news contributor and Daily Wire host, whom Vanity Fair described as “a dapper, lib-triggering troll,” was invited to the university by Young Americans for Freedom to host an event called ‘A night with Michael Knowles’ during which he was scheduled to give a talk titled, ‘Men are not women.’

However just 15 minutes into the event, this happened:

BREAKING VIDEO: One person injured following protest at event hosted by conservative group Young Americans for Freedom. According to guest speaker Michael Knowles, a student threw bleach at him and was arrested. pic.twitter.com/nBC2B25dXz

A student tried to squirt bleach on me during my speech tonight. Lucky for me we was a left-winger and couldn’t even shoot a squirt gun! pic.twitter.com/VHKS4hD4vW

The protester rushed the stage with a water pistol filled with what was initially believed to be bleach. He was tackled and detained by campus security while fellow protesters chanted “hands up, don’t shoot!”

“The protest turned disruptive and after several warnings, the disruption persisted, and one protester was arrested,” UMKC officials said in an emailed statement.

We have a responsibility to allow free speech, but we cannot condone physical disruptions of peaceful activities. We believe free speech can be exercised constructively in a way that doesn’t put people at risk. We are gathering facts and will review campus policies & procedures.

Protesters gathered outside the event carrying signs which read “Trans rights are human rights,” “Respect my existence,” and “Trans men are men.”

Kansas city police assisted University police with the arrest and crowd control after the incident.

The apparent assault is one of manysuchincidents at predominantly conservative university events over the past few years, especially since Donald Trump took office in the White House. Many conservatives were vocal in their support of Knowles online.

Hey guys, I disagree with @michaeljknowles a lot too…. but like…. I talk to him instead of throw bleach. Maybe I’m old fashioned but seems like it could work better.

Wow Republican @michaeljknowles was attacked by a masked leftist that shot an unknown substance at him during his event in Missouri. Police took down the attacker and other leftists had the audacity to scream “hands up don’t shoot” at officers. Lunatics! pic.twitter.com/AGNoNg2fJS

This is unreal. Kid could have easily been shot. If we can’t host debate with people we disagree with, we are on the verge of at best segregation and at worst mass civil violence. This has to change. Learn to “agree to disagree.”

“Hands up, don’t shoot!”
The guy shot something at @michaeljknowles with a f**king super soaker filled with God knows what… maybe don’t be crazy and attack people with mystery glitter juice? https://t.co/rwyG6LjFTv