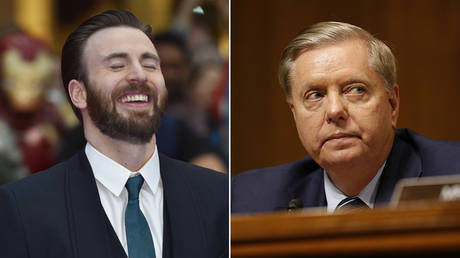 Actor Chris Evans, aka Captain America, has launched a scathing attack on South Carolina Senator Lindsey Graham on Twitter over the Republican’s perceived “shameful 180” on President Donald Trump and his policies.

“You know how you make America great again? Tell Donald Trump to go to hell,” Graham famously told CNN in December 2015, however, his tone has softened in recent months, much to the chagrin of Captain America, a frequent critic of Trump.

Hey Smithers, remember when you said this:
‘You know how you make America great again, tell Donald Trump to go to hell.’
What do they have on you? I can’t tell if this shameful 180 is born of fear or thirst. Either way, we will always remember you as nothing more than remora. https://t.co/2eZ2Zxqpkv

Waylon Smithers is the sycophantic “yes-man” sidekick to the fictional nuclear energy billionaire oligarch Mr. Burns in the long-running cartoon series The Simpsons.

Also on rt.com
Captain America savages Trump in battle of the useful idiots


“What do they have on you?” the Avengers star asked, insinuating that Graham had been blackmailed into his new-found support for Donald Trump, his erstwhile 2016 presidential campaign rival.

“I think Donald Trump is going to places where very few people have gone and I’m not going with him,” Lyndsey said upon withdrawing from the race. He would later publicly state that he voted for neither Trump nor Democrat nominee Hillary Clinton, opting instead to vote for outsider Evan McMullin.

I voted @Evan_McMullin for President. I appreciate his views on a strong America and the need to rebuild our military. #3

Graham has been a staunch critic of Trump throughout the latter’s presidency, notably taking The Donald to task for his conduct towards the late John McCain, his handling of the US relationship with Saudi Arabia and Crown Prince Mohammed bin Salman in particular and his often erratic policy decisions in regard to Syria.


However, he appears to have changed tac recently, trying to garner favor with Trump over issues such as the border wall, ostensibly the reason for the ongoing US government shutdown.

Some pointed out Graham’s hypocrisy and his flip-flopping on Trump.

While others lauded the Simpsons reference.

Others still drew on Evans canon of acting work for commentary on the situation, while also praising the unusual but apparently appropriate ‘remora’ insult – perhaps the ‘dotard’ of 2019?