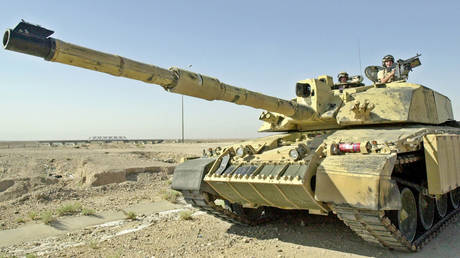 The UK Ministry of Defence (MoD) admitted that British military personnel have been using banned toxic paint to rust-proof tanks and jeeps, despite knowing it has links to cancer.

The paint, which contains chromium (VI), a heavy metal known as hexavalent chromium, was banned from most manufacturing in an EU directive in 2003. Shockingly, the UK government revealed the military was still using the paint in December, 2018.

Also on rt.com
Special UK armed soldiers in ‘NUCLEAR-PROOF BUNKER’ have been ‘activated’ to prepare for Brexit


Martin Docherty-Hughes, SNP MP for West Dunbartonshire, who raised the issue in Parliament in December, slammed the MoD for giving the green light to British service personnel using “a noxious, cancer-causing chemical,” in light of the controversy it has caused in other countries.

…the MoD often needs to be dragged kicking and screaming into addressing the most basic issues of health and safety.

US troops successfully sued a defense contractor for $85 million in 2012 for knowingly exposing them to chromium (VI) while on tour in Iraq.

The Netherlands apologized to Dutch personnel last year after they contracted illnesses, including cancer, having worked with the toxic chemical. Compensation of up to €40,000 (US$45,000) was said to have been agreed.

The MoD insisted on Monday that the paint has been phased out of use, but apparently as late as this January. They have been unable to state whether British troops suffered from exposure to the deadly toxin.


Defence Minister Stuart Andrew insisted the MoD is committed to reducing the amount of hazardous substances personnel come in contact with. Research on chromate-free paint products was “due to finish in 2019,” Andrew added.