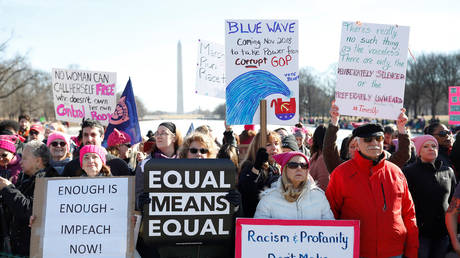 An upcoming Women’s March event in California has been canceled as organizers feared it would be ‘overwhelmingly white,’ despite taking place in overwhelmingly-white Humboldt County.

The event, scheduled for January 19 in Eureka, was canceled after “many conversations between local social-change organizers and supporters of the march,” according to a Facebook post from Beth Ann Wylie, one of the organizers.

Instead of pushing forward with crucial voices absent, the organizing team will take time for more outreach.

“Up to this point, the participants have been overwhelmingly white, lacking representation from several perspectives in our community,” Wylie wrote.

Critics reminded the group that Humboldt County, where Eureka is located, is over 74 percent non-Hispanic white – not exactly a bastion of diversity. But they appear to be optimistic that they can get more diverse in a month or two, claiming to be planning a March event to celebrate International Women’s Day.

The announcement sparked conspiracy theories and plenty of backlash on Twitter.

The Women’s March has been plagued with internal discord in its third year. A Chicago rally was called off last week, citing the high costs of organizing the event, though the regional organization has also been fraught with controversy stemming from leaders’ links to the Nation of Islam’s Louis Farrakhan. One of the Women’s March founders, Teresa Shook, has called for the resignation of her co-chairs, claiming they have allowed “anti-Semitism, anti-LGBTQIA sentiment and hateful, racist rhetoric to become a part of the platform.” Shook is white; co-chairs Tamika Mallory, Carmen Perez, and Linda Sarsour are not. Oops!