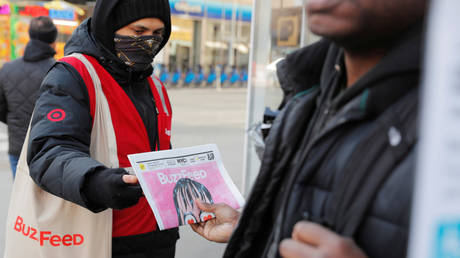 BuzzFeed reporter Jane Lytvynenko tweeted to announce the news of the hunt almost immediately after the report’s release on Thursday, encouraging readers to say something if they see something that would constitute “disinformation, hoaxes, conspiracies and hyperpartisan spin surrounding the Mueller report.”

Hi! We are watching for disinformation, hoaxes, conspiracies and hyperpartisan spin surrounding the Mueller report.

See anything? DM me or email jane.lytvynenko@buzzfeed.com

For updates from our team, watch @BuzzFeedNews

Indeed, BuzzFeed should know something about hyperpartisan conspiracies as, afterall, it published the Steele dossier – a DNC-commissioned paper written by ex-MI6 spy Christopher Steele – which included salacious allegations against US President Donald Trump and served to give a massive push to ‘Russiagate’ hysteria. Steele recently admitted, over two years after the report’s damage had been done, he had used unverified sources from the internet in its creation.

It was also BuzzFeed that reported earlier this year that Trump directly instructed his attorney Michael Cohen to lie to Congress about his plans to build a Trump Tower property in Moscow. That ‘scoop’ was bad enough in that Mueller himself – who is not known as a Trump sympathizer to say the least – denied it.


Some of the commenters eagerly took Jane up on her offer – and fed her back BuzzFeed’s own scandalous reporting.

Also, @BuzzFeed are the irresponsible jackasses that published the Steele Dossier.

If your looking for hoaxes and conspiracies you should check out @BuzzFeedNews. Their “writers” are nuts

Although, given BuzzFeed’s previous stunts, one shouldn’t count on them to acknowledge the irony.