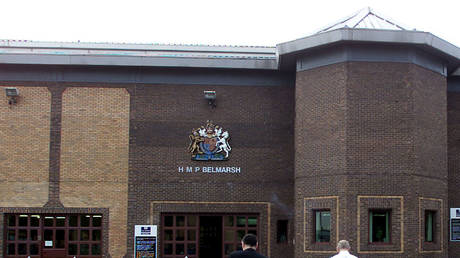 WikiLeaks founder Julian Assange is being held at Belmarsh Prison, a notorious jail in southeast London that’s earned the moniker of ‘Britain’s Guantanamo Bay’ as a holding facility for terrorists and other high-profile prisoners.

RT’s Ruptly agency live-streamed footage from Belmarsh on Friday, after Assange was apparently taken there. Bloomberg reported the same information later, citing Assange’s friend Vaughan Smith. Both Assange’s lawyers and the UK authorities are yet to publicly confirm his whereabouts.

Belmarsh is located on the eastern outskirts of London, about 5 miles (8 km) east of Greenwich on the southern bank of the Thames River. The prison opened in 1991, and has been used to imprison high-profile inmates such as Jordanian cleric Abu Qatada and Salafist preacher Anjem Choudary – but also former Labour MP Denis MacShane, convicted of fraud, and former Conservative politician Baron Jeffrey Archer, convicted of perjury.

Belmarsh was also used as the holding facility for around 17 individuals detained under anti-terrorism laws since 2001. Some of them were held in solitary for 22 hours a day, “entombed in concrete” without charges for months, their attorneys told BBC in 2004.


Assange spent almost seven years confined to Ecuador’s embassy in the Knightsbridge district of London, having sought asylum over spurious charges in Sweden that he argued – correctly, as it turned out – were a pretext to get him extradited to the US over the 2010 publication of classified US military and diplomatic documents pertaining to the Iraq and Afghanistan wars.

After Ecuador revoked his asylum, Assange was carried out of the embassy by UK police on Thursday and jailed on the US extradition warrant.