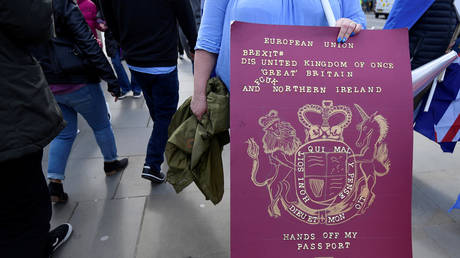 Britain has put in for yet another Brexit delay, but it seems nobody has told the Home Office. New British passports are already being sent out with a cover omitting any reference to Brussels whatsoever.

Amid ongoing political chaos over how and when the UK will actually leave the EU, Prime Minister Theresa May this week asked for another membership extension until the end of June. This means that the UK is currently – and will be for the foreseeable future – a member of the EU. The Home Office, though, is clearly done with all the dallying and ready to move on.

Alarmed and “furious” Twitter user Susan Hindle Barone shared a photo of her new British passport alongside her expiring one to show the key post-Brexit cover change (even though the UK is not quite yet post-Brexit).

TRULY APPALLED. Picked up my new passport today – my old one expires in the next couple of months. See below: Spot the difference! pic.twitter.com/R7BW9lk6I5

I didn’t notice it until I looked at them next to each other. It makes me feel sick.

In an apt reflection of the ongoing Brexit chaos, another British citizen replied to that tweet by showing that their new passport still bears the ‘European Union’ membership note on its cover.

Apparently, the Home Office is not simply hedging its bets on the UK’s EU withdrawal, though, with officials telling the Independent that the remaining stock of passports bearing the ‘European Union’ cover will still be issued as the newer post-Brexit ones are phased in.

The passport service has clarified that regardless of what the cover says, both designs are equally valid for travel for British citizens.

Hi, UK passports issued before we leave the EU will remain valid, and there will be no difference to passport privileges, or their acceptance, whether British citizens hold an EU-branded passport or not. Chris

There was a mixed reaction on Twitter to the early introduction of the new cover design, with some people absolutely delighted to be rid of any mention of the EU on their passport, and others alarmed to see the first concrete signs of Brexit.

You’re lucky; when I renewed earlier this year, I received one with European Union still spat on it!

When we remain after all and all passports get the EU logo back on, it will have real historical value x